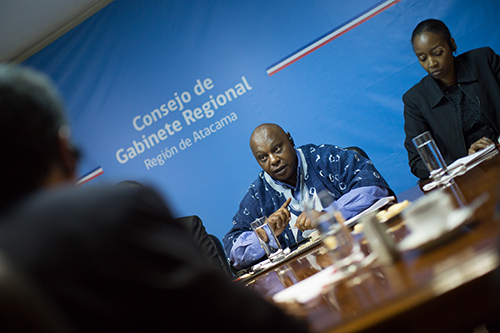 SANTIAGO/GENEVA – United Nations Special Rapporteur Maina Kiai today urged the Government of Chile to eliminate “vestiges of dictatorship” that are detrimental to the freedom of peaceful assembly in the country, and continue reforms so that the country can “take its rightful place as a global leader in human rights.”

“Chile has made enormous strides since its return to democracy 25 years ago,” Mr. Kiai said at the end of the first visit* to the country by an independent expert tasked by the UN Human Rights Council with promoting the realization of the rights to freedom of peaceful assembly and of association worldwide.

“However, there are still remnants of yesteryear that have no place in the Chile of today,” he noted. “The ghost of this era looms particularly large over the security sector, chiefly the police—and specifically the Special Forces—and their function in policing social conflicts and assemblies.”

The expert expressed concern about Chile’s practical management of protests. During his visit, he was informed of numerous and varied examples of violations perpetrated by police during protests, including excessive force and harassment of activists.

A particularly disturbing example, he said, was the July 2015 killing of Nelson Quichillao, a copper mine worker who was shot dead by Special Forces in the town of El Salvador during a labor protest. Authorities claim the demonstration was not entirely peaceful, but Mr. Kiai noted that “individuals retain at all times their rights to life and physical integrity, even if they become violent during protests, and it is the State’s duty to safeguard these rights.”

He also recalled a September 2015 case, where police used excessive force to clear a peaceful occupation of a government building by indigenous Mapuche activists in Temuco, who were protesting perceived injustices regarding land rights.

Mr. Kiai drew attention to multiple reports – from both civil society and Government – that agents provocateurs frequently disrupt otherwise peaceful protests by students and workers, causing violence and property damage. Authorities then use this disruption to justify the wholesale use of force against all protesters.

“The presence of a few people engaging in violence in and around a protest does not authorize police to brand the entire protest violent. Rather, the violent elements should be extracted from the protest and dealt with in accordance with the rule of law,” he stated.

“In fact, the persistent failure in dealing with these few violent people raises questions about the reasons for inaction by the police as these violent protesters mar the image and effectiveness of public protests,” the expert said.

The independent expert also highlighted several areas of Chile’s legal framework in need of urgent reform, including regulations on the authorization of peaceful assemblies. While the Chilean Constitution recognizes the right to peaceful assembly, its exercise is unduly restricted by Supreme Decree 1086, which allows local officials to prevent or dissolve assemblies that were not previously authorized by authorities.

“Best practice dictates that States may, at most, require prior notification for peaceful assemblies, not authorization,” Mr. Kiai said, urging the Government of Chile to repeal Supreme Decree 1086 immediately.

The Special Rapporteur raised concerns over the use of identification checks by the police, a practice that pending legislation may soon enshrine as law. He said that the practice of stopping individuals at random – without specific evidence of a crime – has the potential to chill the exercise of the right to peaceful assembly.

He also expressed alarm over the use of military courts to try police accused of human rights violations during demonstrations, stressing that placing police under a separate justice system fosters impunity. He urged the Government to undertake “a comprehensive reform” of this system with the “utmost urgency.”

Mr. Kiai found fewer serious issues regarding the protection of the right to freedom of association in Chile, and commended the State for its efforts to uphold this right.

However, he urged the authorities to do more to promote association rights, including by increasing support and resources to the civil society sector, and to place more value on civil society’s input in policy decisions.

“It is clear to me that the Government values the contributions of the private sector to the economy and policy,” he said. “But it is not so obvious that it values civil society associations, including trade unions, in a similar manner.”

During his 10-day visit, Mr. Kiai met State officials, members of the judiciary and of Parliament, members of civil society, and the diplomatic community. His visit included stops in Santiago, Temuco, Copiapó, El Salvador and Valparaiso.

The Special Rapporteur will present a final report on his visit to the Human Rights Council during its 32nd session in June 2016.

More on the Special Rapporteur’s visit to Chile:

Photos from the Special Rapporteur’s visit to Chile