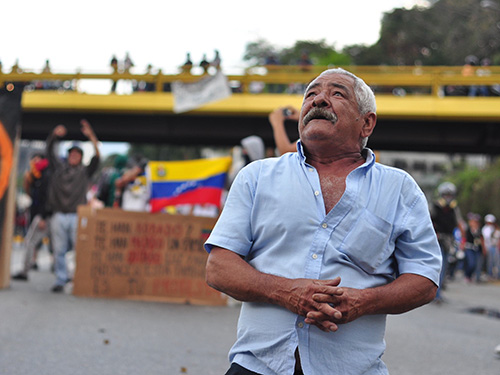 CAMBRIDGE, Massachusetts – UN Special Rapporteur Maina Kiai will participate in a roundtable discussion about the ongoing protests in Venezuela at the Massachusetts Institute of Technology (MIT) on April 11.

The event will be streamed live online at http://ustre.am/1c1VG.

Kiai, who is the Special Rapporteur on the rights to freedom of peaceful assembly and of association, will join Alfredo Millán, a Venezuelan student from MIT, and Juán Andrés Mejía, a Venezuelan activist currently at Harvard who is also a member of Venezuela’s National Commission of the political party Voluntad Popular. Mejía was among several Venezuelan opposition leaders living in the Boston area who were profiled in an article in the Nicaragua Dispatch in February.

Venezuela has been engulfed by protests since early February, when demonstrators took to the streets to voice their displeasure over rising crime, pervasive unemployment and corruption. Media have reported that up to 31 people have died in the protests, while over 1,800 have reportedly been detained or arrested.

Last month, Kiai and other UN Special Rapporteurs called upon Venezuela to account for the alleged arbitrary detentions and use of violence against protesters in an official statement.

“I am deeply disturbed by the reports of deaths and arbitrary detention that have been coming out of Venezuela for the past two months,” Kiai said. “This roundtable is a chance to hear from those deeply involved in the situation, and to better understand the situation in Venezuela.”

“As a general principle, authorities should not resort to use of force during peaceful assemblies. If it is absolutely necessary, it must not be used so that demonstrators are subject to excessive or indiscriminate use of force.”

The roundtable will take place in Room 32-155 of MIT’s Stata Center, located at 32 Vassar St. Kendal Square, Cambridge, Massachusetts. The event is scheduled to begin at 7 p.m. Eastern Standard Time (2 a.m. on Saturday, April 12, East Africa Time). The event is open to the public.