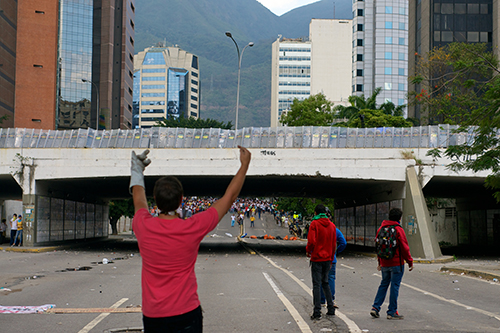 GENEVA – A group of United Nations independent experts, including Maina Kiai, have asked the Government of Venezuela for prompt clarification of allegations of arbitrary detention and excessive use of force and violence against protesters, journalists and media workers during the recent wave of protests in the country.

“The recent violence amid protests in Venezuela need to be urgently and thoroughly investigated, and perpetrators must be held accountable,” the experts stressed. They also expressed their shock at the reported deaths of at least 17 persons during the demonstrations.

“We are deeply disturbed by the allegations of multiple cases of arbitrary detention of protesters. Some were reportedly beaten -and in some cases severely tortured- by security forces, taken to military facilities, kept in incommunicado detention, and denied access to legal assistance,” they said. “These reports need to be urgently clarified and anyone who remains arbitrarily detained should be released without condition.”

“The reports of the arbitrary detention of various journalists and the suspension of the broadcasting activities of TV channel NTN24 covering the protests are very worrying,” they said. “The country needs more, not less information on the ongoing protests.”

The human rights experts, who acknowledged the call for a national dialogue made by President Nicolás Maduro, emphasized the importance of fully guaranteeing the rights to freedom of peaceful assembly, association, opinion and expression in this critical context.

“The reconciliatory dialogue that is so deeply needed in Venezuela is not going to take place if political leaders, students, media groups and journalists are harassed and intimidated by the authorities,” they stressed.

The group of UN independent experts noted they stand ready to visit the country and engage in a constructive dialogue with all parties. “We call the Government to respond positively to pending requests to visit Venezuela, and extend a standing invitation to the UN special procedures mandate holders,” they concluded.

The full version of this press release is available in English, Spanish and Chinese via OHCHR.