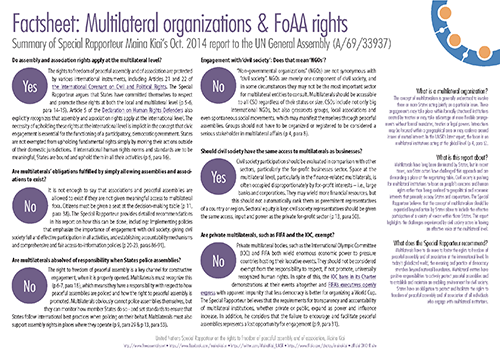 NEW YORK – United Nations Special Rapporteur Maina Kiai will appear before the 69th Session of the UN General Assembly on October 28 to present his latest report, which focuses on the rights to freedom of peaceful assembly and of association at the multilateral level.

Kiai, who is the UN Special Rapporteur on the rights to freedom of peaceful assembly and of association, is scheduled to present at the General Assembly’s 69th Session session on October 28, which begins at 10 a.m. local (EST) time. The session will be broadcast live on http://webtv.un.org/.

Kiai’s thematic report examines how the rights to freedom of peacefully assembly and of association are exercised, promoted and limited in the context of multilateral organizations. The report asserts that these rights are equally fundamental and protected at the national and international levels, but that they are not always upheld at the multilateral level.

“Multilateral organizations have a profound impact on the lives of ordinary people across the globe,” the Special Rapporteur said. “They institute development projects, spur economic and political reform, help shape international law, and more. Yet much of this occurs without the substantive and effective input of ordinary people.”

Kiai said that assembly and association rights are among the most inclusive and effective tools that the world has to allow people to peacefully express their views and push for change. When people are denied these rights they feel powerless, and no good can follow.

“The rights to freedom of peaceful assembly and of association satisfy people’s fundamental desire to take control of their own destinies,” Kiai said. “And I emphasize that these rights are indeed fundamental – not simply because they are inscribed in the law, but because they speak to something present inside each and every one of us as human beings.”

The report details a number of obstacles for those wishing to exercise their rights to freedom of peaceful assembly and of association in the context of multilateral institutions. Very few multilaterals, for example, have formal complaints mechanisms for the general public or allow civil society effective and substantive participation in high-level processes. The report also calls upon multilaterals, and the States that comprise them, to do more about reprisals against human rights defenders who cooperate with such institutions.

Multilaterals do not rank much better when it comes to protecting assembly rights, according to the report. The Special Rapporteur notes that there have been numerous reported violations to the right of peacefully assembly during multilateral institutions’ summits in recent years, notably those organized by the North Atlantic Treaty Organization (NATO) and the Group of Twenty (G20).

The report also argues that private multilateral bodies, such as the International Olympic Committee (IOC) and Fédération Internationale de Football Association (FIFA), are not exempt from the responsibility to respect universally recognized human rights. Despite this, “the IOC bans in its Charter demonstrations at their events altogether and FIFA’s executives openly express with apparent impunity that less democracy or even oppressive military Governments are better for organizing a World Cup,” the report says.

The report is available at freeassembly.net, Kiai’s website for the Special Rapporteur mandate, and on the official OHCHR website for the mandate. The report’s UN document number is A/69/365.

This is Kiai’s second report to the General Assembly since he took up his functions as Special Rapporteur in May 2011.

A factsheet summarizing some of the report’s key findings and recommendation is available here or by clicking the image above.

The full report is available at this link in all six official UN languages.

For a PDF version of this press release, please click here.