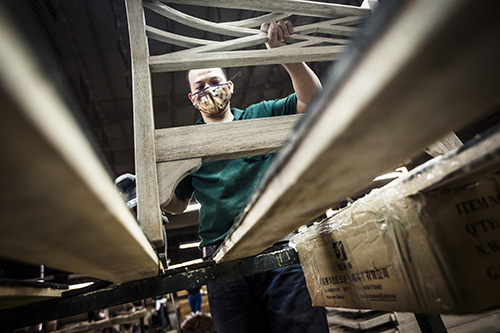 Speaking during the presentation of his final report to the main UN body, the Special Rapporteur on the rights to freedom of peaceful assembly and association highlighted unyielding pursuit of profits, increasing corporate power and the changing nature of employment relationships as leading causes of this decline.

“Assembly and association rights in the workplace continue to be undermined for a large proportion of workers, mainly because of an economic world order that relentlessly pursues ever-increasing growth and profit at all costs,” Mr. Kiai stated.

“Meanwhile,” he added, “the growing power and geographic reach of large corporations has meant that States are increasingly unwilling or unable to regulate these business entities and their attempts to place profits ahead of the rights and dignity of workers.”

The independent expert warned that, without the checks and balances provided by robust protection for workers’ rights, workers are inevitably seeing a decline in working conditions, social protections, and labour relations. He underscored that assembly and association rights form the foundation for labour’s traditional tools for asserting rights, including unions, strikes and collective bargaining.

The report paints a grim picture and cites dozens of examples of violations of worker’s assembly and association rights in more than 50 countries, ranging from union busting to legislative gaps to assassinations of union leaders.

The UN expert highlighted as an example the situation of migrant workers in the Middle East kafala system and the United States H2 visa program. Employers in both systems have near total control over guest workers, which is “a significant deterrent to their free exercise of assembly and association rights,” Mr. Kiai said.

The expert also referred to the situation of women, supply chain workers, migrants, informal workers and domestic workers, whom he said have been hit particularly hard by the deterioration of assembly and association rights.

The Special Rapporteur emphasised that the primary burden for protecting and promoting assembly and association rights falls upon States, who must take positive measures to do this.

“I have heard too often of States working to undermine these rights, or purporting to remain ‘neutral’ or ‘hands-off’ in the struggle by workers to claim their rights,” Mr. Kiai said. “Let me be clear: Under international human rights law, States have a positive obligation to facilitate the enjoyment of all rights, including the right of association for the purposes of joining trades unions. There can be no neutral position in this regard.”

The Special Rapporteur said that fresh approaches were needed in order to enable all workers to fully enjoy their rights.

“The old ways of defending workers’ rights are no longer working,” he said. “Our world and its globalized economy are changing at a lightning pace, and it is critical that the tools we use to protect to labour rights adapt just as quickly.”

For the report, factsheet and other related materials, see here: http://freeassembly.net/reports/workers-rights/

A full transcript of Maina Kiai’s statement to the General Assembly is available here (English only).

The full version of this press release is available via OHCHR in English.