UN expert: Promote civil society by elevating its treatment to the same level as business 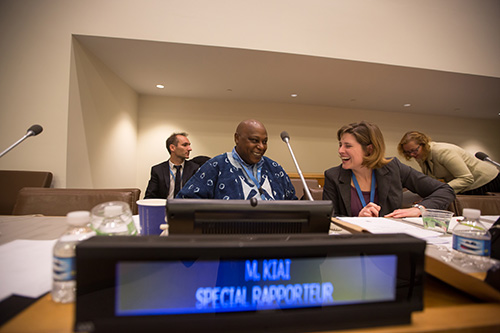 NEW YORK/GENEVA – Civil society’s contributions to a nation’s wellbeing are just as important as those made by businesses, UN expert Maina Kiai told the UN General Assembly today. He called on States to give the same level of respect and create enabling environments for civil society groups, just as they do for companies.

Speaking during the presentation of his latest report, which compares the operating environments for commercial and civil society sectors worldwide, Kiai said that it was clear that businesses generally operate in better environments than non-profit entities – largely because States go to great lengths to create such facilitating environments. Unfortunately, governments make comparatively little effort to improve conditions for civil society, resulting in its marginalization.

“There is no compelling reason why the civil society sector should have to operate in such a hostile environment, when it is possible for States to do much more to facilitate and promote a more enabling environment, like they do for businesses,” said Kiai, who is the Special Rapporteur on the rights to freedom of peaceful assembly and of association. “Both sectors, after all, are equally deserving of promotion by the State, and both contribute enormously to the overall wellbeing of a nation.”

Elevating the treatment of civil society “is clearly not a question of capacity. It is simply a question of political will,” he added.

The Special Rapporteur cited a long list of policies that discriminate against civil society, and highlighted the absurdity of applying these same regulations to businesses.

In Nicaragua, for example, the granting of legal entity status to non-profit organizations requires an act of the National Assembly; starting a company is comparatively easy, with no significant State discretion. In Rwanda, foreign NGOs face a 20 per cent limit on overhead costs in programmes, a level of government interference unimaginable in the commercial sector. And countries such as Egypt, Ethiopia, India and Russia, have recently tightened restrictions on associations’ access to foreign funding, while simultaneously opening up their economies to much greater commercial investment from abroad.

Kiai called on States to adopt the principle of “sectoral equity” as a remedy to what he termed a “concrete, systematic and often unjustifiable differentiation in treatment of the two sectors.”

“Sectoral equity is not about treating businesses and associations identically,” Kiai said. “Rather, it implies a fair, transparent and impartial approach in which the regulation of each sector is grounded in international law, standards and norms.”

“Sectoral equity also means States should recognise that civil society is just as valuable to the economy and the labour market as businesses and therefore just as deserving of proactive measures to create an enabling environment,” he added.

The UN expert said he was optimistic about the prospects of States’ elevating their treatment of civil society because this goal ultimately serves the business community’s interests as well.

“The presence of a robust, vocal and critical civil society sector guarantees, almost without exception, that a State also possesses a good business environment,” Kiai said. “The rule of law is stronger, transparency is greater and markets are less tainted by corruption. In other words, when civil society does well, business does well too. This is not a fanciful hypothesis or wishful thinking. It is an undeniable fact.”

For the report, factsheet and other related materials, see our sectoral equity page: http://freeassembly.net/rapporteurreports/sectoral-equity/

A full transcript of Maina Kiai’s statement to the General Assembly is available here (English only).

The full version of this press release is available via OHCHR in English.