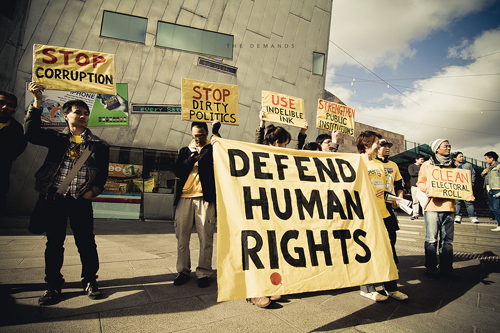 A group of United Nations independent experts warned that a new Peaceful Assembly Bill in Malaysia may “arbitrarily and disproportionately restrict the right to assemble peacefully.” The restrictions range from a ban on street protests and a prohibition on non-citizens and citizens under 21 years of age to assemble peacefully, to conditional access for media to public gatherings.

“Many of these restrictions are not justifiable under international law,” said the Special Rapporteur on the rights to freedom of peaceful assembly and of association, Maina Kiai, expressing his deep regret that “neither the Human Rights Commission of Malaysia (SUHAKAM), nor civil society was meaningfully consulted in the drafting of this Bill.”

According to the proposed legislation, which contains a vague definition of assembly, there would also be broad restrictions and conditions on gatherings and a restrictive notification procedure. The Bill gives excessive authority and power to law enforcement officials and the Minister in charge of home affairs on matters related to assemblies, as well as full discretion to the police to make any form of recording of assemblies.

“The right to assemble and protest peacefully is an essential safeguard for the defence of human rights and fundamental freedoms in any pluralistic society,” said the Special Rapporteur on human rights defenders, Margaret Sekaggya. “I am particularly alarmed by the provision prohibiting citizens under 21 years of age to assemble. Political and social participation through peaceful protests are not only an educational experience for children, youth and students but also an investment for society as a whole.”

The Special Rapporteur on the right to freedom of expression, Frank La Rue, urged the Government of Malaysia to seriously reconsider the adoption of the bill, which would contravene international human rights standards. “The ability of all individuals to express themselves freely, including in the form of peaceful assemblies, is a litmus test for the level of democracy in any country,” he said recalling a previous call of concern on the Government’s response to the Bersih 2.0 demonstrations in November.*

“Under international human rights law, ‘everyone’ has the right to freedom of assembly and association, without distinction of any kind, including nationality,” said the Special Rapporteur on the human rights of migrants, François Crépeau. “I am deeply concerned at the provision of the draft law which prohibits non-citizens to organize or participate in a peaceful assembly. I appeal to the Government of Malaysia to urgently review the Bill to ensure its compliance with fundamental human rights.”

The group of UN independent experts warned that “with this legislation, people in Malaysia may not be able to express their dissent in public spaces without fear of being detained or sanctioned.”