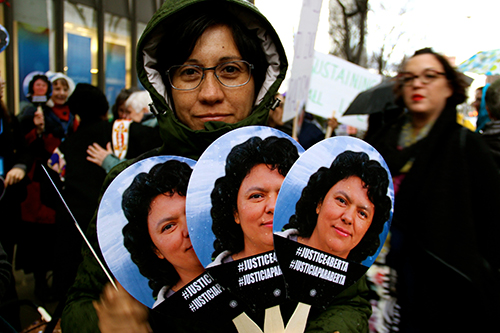 GENEVA – More than a month after Berta Cáceres’ murder, United Nations experts – including Maina Kiai – have reiterated their appeal to the Government of Honduras to provide justice and reveal the truth in the killing of the woman human rights defender, and to ensure the security and protection of all people defending the environment and human rights in the country.

Berta Cáceres, founder of the Civic Council of Popular and Indigenous Organizations Honduras (COPINH), was shot to death on 3 March 2016 in spite of the 2009 decision by the Inter-American Commission of Human Rights requiring Honduras to protect her.

Despite repeated acts of intimidation, including gender-specific attacks, arrests and violence that she suffered over the years, she continued to defend the rights of the Lenca community of Rio Blanco, denouncing and opposing the exploitation of indigenous natural resources, especially via the hydroelectric project of ‘Agua Zarca’.

“The murder of Berta Cáceres, which is believed to be directly linked to her work and to the fact that she was a woman and indigenous, sadly illustrates an appalling backlash against women human rights defenders and, especially against environmental activists,” the experts stated.

Women human rights defenders are generally further exposed to retaliation, harassment and violence as they usually challenge the patriarchal culture and deep-rooted gender stereotypes about the role of women in society.

“Honduras must intensify its efforts to end the persistent climate of impunity and insecurity for women human rights defenders, indigenous leaders and ecologists,” they said.

The UN experts were pleased to see the Honduran Government’s decision to finally allow the return of Gustavo Castro Soto to Mexico. They also noted the arrest of a suspect in the murder of another member of COPINH, Nelson García, and recalled the necessity to investigate who ordered this crime.

“We encourage Honduras to act with due diligence in investigating Berta Cáceres’ murder, and to effectively ensure the protection of her relatives and members of COPINH as requested by the Inter-American Commission on Human Rights,” they added.

“We reiterate our call for a fully independent, impartial, transparent investigation of Berta Cáceres’ assassination and in this regard we support the request made by the relatives of the victim that a group of experts be established under the authority of the Inter-American Commission on Human Rights,” they recommended.

The UN human rights experts welcomed the decision of the investors of the ‘Agua Zarca’ dam project to suspend their funding after the recent murders and attacks.

This statement is also available in Spanish.