This page summarizes cases raised with Maldives by the Special Rapporteur between May 1, 2011, (when the Special Rapporteur took up his functions) and February 28, 2017 (the date of the last public release of communications). Communications are released to the public once per year. This page also contains observations on these communications and on responses received from Maldives. Communications and observations are divided into sections based upon which observation report they originally appeared. Each communication is referenced as urgent appeal (UA), allegation letter (AL), joint urgent appeal (JUA) and joint allegation letter (JAL) - the hyperlinks lead to these documents. This is followed by the date the communication was issued, as well as the case number and the State reply (also hyperlinked if available). Summaries and communications are published only in the language of submission (in the case of Maldives, English). First Report (May 1, 2011 to March 15, 2012) Joint urgent appeal, 29/02/2012. Case no. MDV 2/2012. State Reply: None to date. Allegations of excessive use of force against protestors belonging to the Maldivian Democratic Party (MDP). Observations The Special Rapporteur regrets that the Government of the Maldives did not respond to his communication dated 29 February... Continue reading → 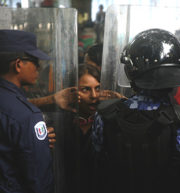 GENEVA -- The UN Special Rapporteur on freedom of expression, David Kaye, deplored the adoption on 9 August of the “Protection of Reputation and Good Name and Freedom of Expression Bill” by Parliament in the Maldives, warning that it limits the right to freedom of expression to such a degree that the right itself is in jeopardy. His call was endorsed by Special Rapporteurs Maina Kiai and Michel Forst. “Criminalising speech on such vague and broad grounds as set out in the Bill is a direct attack on the exercise of the right to freedom of expression in the Maldives,” said Mr. Kaye. “Freedom of expression is a fundamental right and any restrictions on it must be a narrowly and objectively defined, not a matter of common routine.” The adopted Bill would criminalise speech deemed to be defamatory, to comment against “any tenet of Islam”, to “threaten national security” or to “contradict general social norms”. Those committing an offence under the bill can face fines and failure to pay the fine will result in jail sentence of three to six months. Mr. Kaye underlined his concerns on the vague use of religion, social norms and defamation as reasons for punishing expression. “The broad grounds for restrictions in the Bill contradict not only international human rights standards... Continue reading →