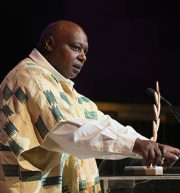 NAIROBI/WASHINGTON – Special Rapporteur Maina Kiai has been named the recipient of the American Federation of Labor and Congress of Industrial Organizations’ (AFL–CIO) 2016 human rights award, and will be in Washington, DC, to accept the honor on Dec. 14, 2016. The annual prize – known officially as the George Meany-Lane Kirkland Human Rights Award – was created in 1980 to recognize outstanding examples of the international struggle for human rights through trade unions. It is named for the first two presidents of the AFL-CIO. Kiai, who is the United Nations Special Rapporteur on the rights to freedom of peaceful assembly and of association, is receiving the honor “in recognition of his dedication to and effectiveness in highlighting the widespread denial of fundamental human rights at work and in society.” The Special Rapporteur has made the issue of assembly and association rights in the workplace a central theme of his mandate, focusing on the subject in his 2016 report to the General Assembly and addressing labor issues extensively during his official visits to UN Member States. “It is a singular honor to receive the 2016 George Meany-Lane Kirkland Human Rights Award – not only because of its stature, but also because it comes from the labor rights community,” Kiai... Continue reading →