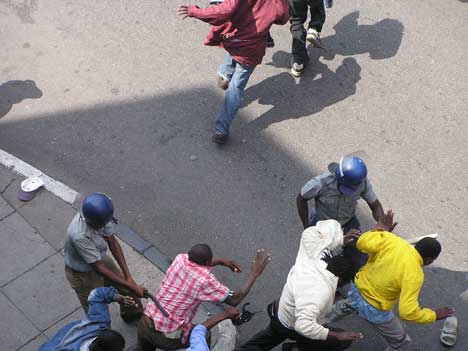 Maina Kiai and two other United Nations Special Rapporteurs urged today the Government of Zimbabwe to respect international human rights norms and standards pertaining to freedoms of association, of peaceful assembly and of expression in the run up to the constitutional referendum on 16 March and subsequent elections which may take place next July.

As Zimbabwe is entering a critical electoral period, the three international human rights experts have received increasing numbers of reports about acts of intimidation and harassment, physical violence and arrests against civil society actors, mostly working on human rights issues.

“In the context of proposed constitutional reforms and the elections, it is disturbing and shocking to learn that civil society organizations that have been operating for years, including election monitoring groups which aim to promote free and fair elections, have been searched by police,” said the Special Rapporteur on the rights to freedom of peaceful assembly and of association, Maina Kiai.

“Search procedures must not be applied selectively, and the right to privacy needs to be respected. Otherwise, the independence of associations and the safety of their members will be seriously at risk,” he emphasized.

For several months, a number of civil society organizations have been subjected to searches by police. During these searches, several items, including files with donor information, annual reports and human rights documents, have been seized.

“With the referendum less than two weeks away, human rights defenders who promote participation have a critical role to play,” added the Special Rapporteur on the situation of human rights defenders, Margaret Sekaggya, while expressing alarm at the apparent on-going crackdown against rights defenders. “They must be protected by the Government and attempts to stifle criticism must end,” she urged.

The experts also voiced their concern at the police’s use of force against, and arrests of, peaceful protesters taking part, and handing out roses and teddy bears, in an annual Valentine’s Day protest outside Parliament in Harare on 14 February 2013.

The three independent human rights experts expressed serious alarm that the increase in attacks against civil society actors coincided with the official announcement that 16 March had been set as a date for the constitutional referendum.

“We urge the authorities to take all relevant measures to ensure everyone’s voice is heard, in view of the recurrence of acts of intimidation and harassment against those exercising their rights to freedom of peaceful assembly and of association, which are essential components of democracy,” they underscored.

The Special Rapporteurs noted that constitutional referendum and elections are a unique opportunity for the authorities to promote and ensure the participation of all. “We stand ready to provide any assistance to contribute to the protection of fundamental freedoms in Zimbabwe, including through a country visit,” they said.