OSCE civil society: ‘Political will’ a major obstacle in protecting right to funding 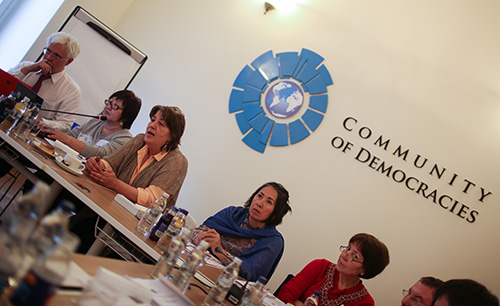 (WARSAW, Poland) – Political will is a major obstacle in ensuring civil society’s access to resources in many OSCE countries, according to participants in a May 7 regional dialogue organized in Warsaw by the Community of Democracies and the team of UN Special Rapporteur Maina Kiai.

“It’s not a question of convincing [some governments] through enough human rights laws or standards,” said one participant. Sometimes “they can’t be convinced.”

The dialogue was the first event in a new two-year project focused on enhancing space for civil society and strengthening the right to access financial resources. The project was launched in February, and is being funded by the Swedish Ministry of Foreign Affairs.

The May 7 Warsaw event looked at international human rights norms, standards and mechanisms to promote the right to freedom of association – and possible ways to strengthen these tools. More than 20 members of civil society from throughout the OSCE region participated.

The focus on political will was central to the discussions, with one participant saying that talking about human rights norms to the government in his country was like “talking to the wall.”

As a result, the road to ensuring civil society’s access to resources will require creative schemes and new ways of thinking, participants said – both from civil society itself and from donors.

“The old schemes to support CSOs are not working so well any more – we need to adapt them,” said one participant from Russia, adding that this requires political will from donor-side governments as well.

For those countries dependent on foreign development aid, several participants argued that such aid should be made conditional on human rights benchmarks, including those measuring the freedom for civil society to operate. For countries less dependent on aid, one participant suggested using access to international business investment as leverage. There is also a need for a formal aid-effectiveness mechanism that constantly monitors events on the ground and is capable of a nimble response.

“It’s clear that restrictions on civil society’s ability to access funding are increasing worldwide, and there is no indication that the situation will improve in the near term,” said UN Special Rapporteur Maina Kiai, who was not able to attend the Warsaw dialogue. “We need to get more creative in how we tackle this problem, and this project is the first step in that direction.”

The Warsaw event was the first of five regional civil society dialogues that will be held throughout the world during 2014-15 as part of the joint UNSR-Community of Democracies project. Separate consultations will also take place with the governments in each region. The results of the dialogues are expected to be presented in a preliminary form at a final conference in 2015.

Kiai has taken a special interest in issue of access to resources, making it the central focus of his 2013 report to the Human Rights Council.

Prior to the May 7 workshop, members of Maina Kiai’s team also participated in a roundtable on funding, independence and accountability of associations at the OSCE Office for Democratic Institutions and Human Rights (ODIHR) in Warsaw. The event brought together some 40 civil society leaders and experts from a number of OSCE states and was aimed at helping advance OSCE-ODIHR’s work with the Venice Commission in drafting guidelines on freedom of association.

Photos of both Warsaw events are available at the mandate’s Flickr page (full set) and on Facebook (selected photos only).

A copy of the “General Principles: Protecting Civic Space and the Right to Access Resources” – a reference document drafted by the Community of Democracies and the Special Rapporteur and distributed at the workshop – is available at this link. The document summarizes three general principles under international human rights norms and standards regarding the ability of civil society to seek, receive and use resources. It also provides arguments supporting specific aspects of each principle, with hyperlinks to source documents where relevant.