Kiai: Twenty years after genocide, Rwanda should pave the way towards peaceful dissent 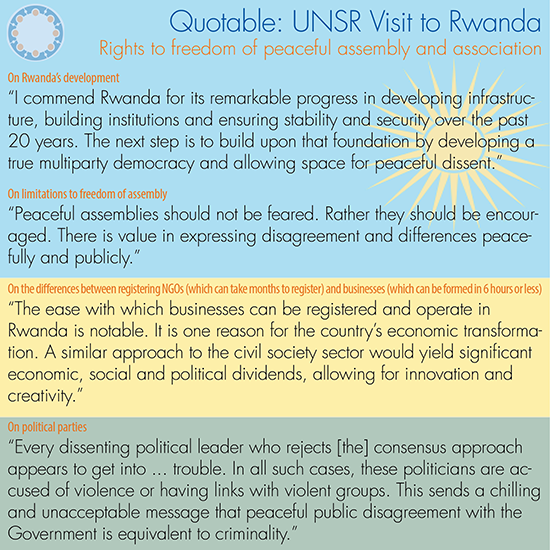 KIGALI / GENEVA – United Nations Special Rapporteur Maina Kiai commended the Rwandan Government on its economic development in the 20 years since the 1994 genocide, but urged that undue restrictions on the freedoms of peaceful assembly and association be lifted so that the country can expand its achievements to the fields of multiparty democracy and human rights.

“I commend Rwanda for its remarkable progress in developing infrastructure, building institutions and ensuring stability and security over the past 20 years,” Mr Kiai said* at the end of his first official visit to the country. “These efforts have laid the foundation for a bright future for Rwanda.”

“The next step is to build upon that foundation by developing a true multiparty democracy and allowing space for peaceful dissent,” stressed the independent expert charged by the UN Human Rights Council to monitor and promote the realization of the rights to freedom of peaceful assembly and of association worldwide.

The Rwandan Constitution guarantees freedom of peaceful assembly, but the Special Rapporteur said he found that in practice, peaceful protests criticising government policies were generally not allowed. He also noted a “contradiction in requiring both prior notification and authorisation, paving the way for arbitrary decisions by the authorities.”

“Let me emphasize that peaceful assemblies should not be feared,” the human rights expert said. “Rather they should be encouraged. There is value in expressing disagreement and differences peacefully and publicly.”

Rwanda’s constitution also guarantees the right to freedom of association, but Mr Kiai said that in practice, there are onerous obstacles to registration, limits on civil society’s freedom to operate in certain fields, and government interference in the internal affairs of groups deemed too critical of official policy.

The Special Rapporteur also noted concern from many people that the body charged with regulating local NGOs, the Rwanda Governance Board (RGB), interfered in the internal affairs of some organizations.

“The independence and ability of associations to run their internal affairs without external interference is of paramount importance in the exercise of the right to freedom of association,” he said. “I see no justification for RGB involving itself in leadership wrangles within local NGOs.”

The independent expert drew attention to the “striking difference between the registration process for NGOs and businesses.” Civil society groups can take months to register, while businesses can be formed in six hours or less.

“The ease with which businesses can be registered and operate in Rwanda is notable. It is one reason for the country’s economic transformation,” Mr Kiai said. “A similar approach to the civil society sector would yield significant economic, social and political dividends, allowing for innovation and creativity.” 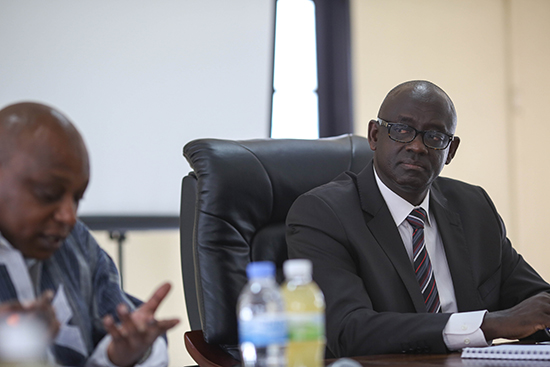 The Special Rapporteur observed “a lack of space” for individuals to express dissenting views in the political realm, due to the Government favouring a type of “consensus politics” that strongly discourages public criticism. Registration of political parties, he said, is also “long, laborious and, in far too many instances, arbitrary.” The Green Party, for example, spent four years securing its registration. Other key opposition parties remain unregistered.

“Every dissenting political leader who rejects this consensus approach appears to get into legal trouble, with the most common charges being denying the genocide, sectarianism, corruption, and even spreading rumours,” Kiai said. “In all such cases, these politicians are accused of violence or having links with violent groups. This sends a chilling and unacceptable message that peaceful public disagreement with the Government is equivalent to criminality.”

The human rights expert highlighted the cases of Ms Victoire Ingabire, Mr Sylvain Sibomana and Mr Anselme Mutuyimana from the FDU Inkingi, an opposition party that has been unable to register to date, as well as of Mr Bernard Ntaganda from the PS Imberakuri. They have all been sentenced from four to fifteen years in prison on similar charges.

During his eight-day visit, Mr Kiai met State officials, members of the judiciary and of Parliament, representatives of the National Human rights Commission, members of civil society, and the diplomatic community.

The Special Rapporteur will present a final report on his visit to the Human Rights Council during its 26th session in June 2014.

The Special Rapporteur’s full statement at the conclusion of his visit to Rwanda is available here.

Below is a list of selected media coverage of Maina Kiai’s visit to Rwanda: