Special Rapporteur: Assembly & association rights are inviolable, even for those “seen as being different” 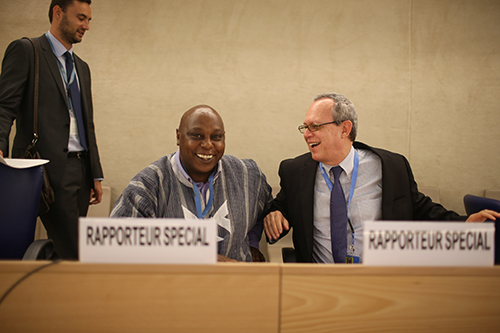 GENEVA – Special Rapporteur Maina Kiai today urged UN member states to protect the assembly and association rights of all people within their borders – including those who are “seen as being different” and may be marginalized as a result.

Kiai’s remarks were delivered to the Human Rights Council on June 10-11 in Geneva, where he presented three reports – a thematic report on the assembly and association rights of groups “most at risk,” a country report on his official mission to Rwanda, and third on communications transmitted to UN Member States.

The Special Rapporteur’s most recent thematic report documents the challenges faced by marginalized groups in exercising – or seeking to exercise – their rights to freedoms of peaceful assembly and of association. These groups, deemed “most at risk,” include persons with disabilities; youth; women; lesbian, gay, bisexual, transgender and intersex (LGBTI) people; members of minority groups; indigenous peoples; internally displaced persons; and non-nationals, including refugees, asylum seekers and migrant workers.

“It matters not whether we approve or support the activities of these marginalized groups at risk,” Kiai told the Council. “The test of international law is that as long as their activities are non-violent, non-discriminatory, non-xenophobic and do not incite others to violence, they must be protected and facilitated.” 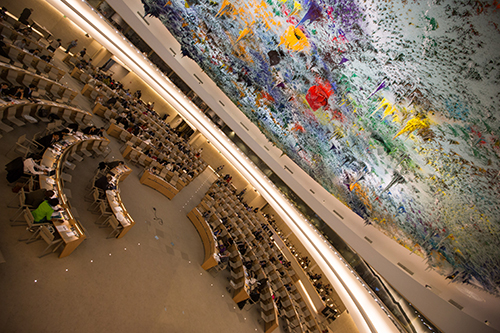 The call for non-discrimination in the application of assembly and association rights drew harsh condemnation from several Member States, including Pakistan, which objected specifically to the report’s focus on allowing LGBTI individuals and groups to exercise their rights to freedom of peaceful assembly and of association. Pakistan’s delegate told the Council that there “is no consensus on LGBTI rights” and therefor these rights should not be “propagated as part of international law.”

Egypt also claimed that Kiai was expanding at-risk groups to an “unprecedented level” that they could not condone.

Kiai clarified that his report does not advocate “creating new rights,” but rather enforcing existing ones evenly, without arbitrary discrimination.

The Special Rapporteur also dedicated a portion of his statement to his report on Rwanda, a country he visited in January 2014. He commended Rwanda on its “tremendous reconstruction and growth in virtually all aspects of its national life,” but noted that the country’s approach “to achieve reconciliation is undermined by the limited space to dissenting voices.”

“Several interlocutors emphasised that Rwanda favours a political order based on so-called ‘consensus,’ ” Kiai told the Council. “But this consensus is led by the ruling party and, as a result, discourages public criticism and dissent.”

He also urged Rwanda to review its “onerous requirements on the registration of NGOs,” particularly the difference in approach towards registration of companies – which can be easily registered in six hours.

“Peaceful assemblies, including demonstrations and protests, should be encouraged by States,” he said. “It is in fact, to the State’s advantage to gauge citizens’ views, including disagreement, by peaceful means, rather than through more confrontational and non-peaceful alternatives.”

A transcript of Kiai’s statement to the Human Rights Council is available at this link (English original) and here in French (unofficial translation).

OHCHR’s official press release is available in English and Chinese.