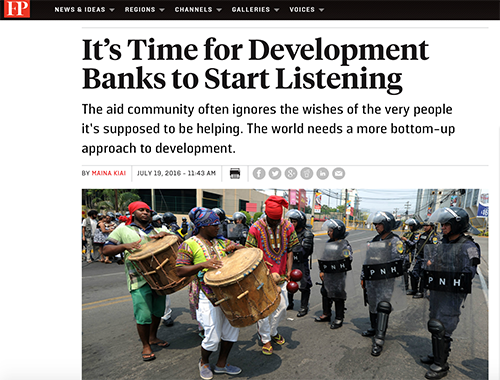 UN Special Rapporteur Maina Kiai has authored an op-ed in Foreign Policy in which he calls upon international financial institutions to counter the global trend of closing civil society space by promoting more community participation in their activities.

His call comes roughly one year since the United Nations set the Sustainable Development Goals (SDDGs), an ambitious blueprint for governments and financiers to use their political power and resources to end poverty, hunger, and disease. Kiai notes in the op-ed that while development banks play a key role in ensuring the success of the SDGs, they cannot do it alone.

“Far more important than governments and international donors are the individuals and civic organizations that will help design, carry out, and monitor the development projects on which the whole scheme depends,” Kiai wrote in the piece. “Without vibrant civil societies, the Sustainable Development Goals are dead in the water.”

Despite this, the entire concept of participatory development is in danger, Kiai notes. In many parts of the world, groups and activists who work to improve development proposals “increasingly find themselves threatened, intimidated, and even violently attacked by governments, investors, private security forces, and others who want to avoid scrutiny.”

“As I have noted repeatedly in my work as U.N. special rapporteur on the rights to freedom of peaceful assembly and of association, civil society is an essential actor in sustainable development,” Kiai wrote. “When people’s rights to assemble and associate are restricted — whether by an environment of fear or intimidation, or by laws that cut off funding of independent groups — we stand no chance of designing development programs that actually meet the needs of poor communities. In this environment of rapidly closing space for public participation, it is critical for development banks and their member countries to defend that role.”

The Special Rapporteur’s call comes a week after a group of 150 civil society organizations from around the world delivered a statement with similar sentiments to the most prominent international financial institutions. The statement called on them to support an environment for public participation in which people can take part in crafting their own development agendas and in holding their governments, donors, businesses, and other actors accountable.

Commentary: The problem of closing civic space creeps into the United Nations’ Committee on NGOs
May 27, 2016

Kiai to financial crime body: foster civil society as a partner, not an enemy, in the fight against terrorism
April 18, 2016
View the quotes in your language: