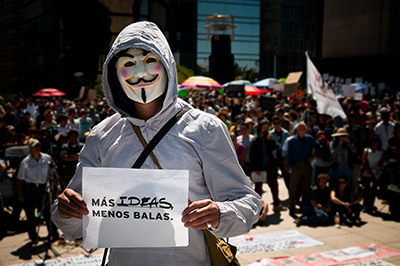 The brief, which was submitted on August 21, 2015, is the second official court filing in the UN expert’s project to advance the rights to freedom of peaceful assembly and of association through the use of litigation in national and regional courts. The first brief was filed in the Constitutional Court in Bolivia in May; a decision in that case is expected soon.

The Special Rapporteur’s Mexico brief was filed in a case challenging the constitutionality of Articles 212, 213 and 214 of the Mexico City Mobility law. Kiai concludes all three provisions fail to comply with “the obligations of the State and the conditions for legitimate restrictions to the right to freedom of peaceful assembly under international law, standards and principles.”

Article 212, for example, requires that the organizers notify authorities 48 hours in advance of a planned public assembly and indicate the “perfectly legitimate objective” of the event. Although the 48-hour notification rule is acceptable under international law, requiring organizers to state a “legitimate objective” is not, as it may allow for discretionary interpretation by authorities.

“It is considered best practice that assemblies are presumed to be legitimate and peaceful,” Kiai wrote in the brief. “Demanding explicit mention of the ‘perfectly legitimate objective’ in the notification therefore creates confusion.”

Articles 213 and 214 of the Mobility law both concern the use of roads for public assemblies. The former prohibits demonstrators from using “primary roads with continuous circulation” except momentarily; the latter states that authorities can take the necessary measures to avoid a blockage of such primary roads.

The Special Rapporteur argues that it is unlikely that a complete ban on accessing ‘primary roads with continuous circulation’ would comply with the International Covenant on Civil and Political Rights, which requires that restrictions on assembly rights be defined in law, pursue a legitimate aim, and be proportional to that legitimate aim.

“A total ban is necessarily not the least restrictive measure available to the State … In addition, the definition of ‘primary roads with continuous circulation’, potentially encompasses almost every road in Mexico City,” Kiai wrote.

The Special Rapporteur concludes by inviting the Supreme Court of Mexico to conduct a thorough analysis of the three challenged provisions with reference to international law.

The full amicus brief is available to the public both in English and Spanish.

For more on the project, please see our litigation hub page.

This post is also available in Spanish via the following link: http://freeassembly.net/rapporteurpressnews/mexico-amicus-espanol/

Update: In August 2016, the Court ruled that all three of the challenged provisions are constitutional, indicating that laws should always be interpreted in a way that they do not cause injury to human rights.

The Court explicitly acknowledged the contribution made by the Special Rapporteur and included a summary of the main arguments.

With regard to the written notice requirement which has to include the ‘perfectly legitimate objective’ of the assembly (Article 212), the Court stressed that such requirement should not be interpreted as an obligation, nor an authorization, but rather an optional notification. Further it noted that the ‘perfectly legitimate objective’ does not constitute an ‘a priori’ requirement for an assembly to take place. The court unambiguously recognized that authorities also have to facilitate spontaneous assemblies. In his brief, the Special Rapporteur had indeed clarified that authorizations turn the right into a privilege and are contrary to international law and that spontaneous assemblies should be exempted from any notification procedures.

With regard to the use of force in the management of assemblies, the Court clarified that the notion of ‘necessary means’ should not serve arbitrary interpretations by the policing authorities. The Special Rapporteur had expressed his concern about arbitrary interpretation of vague notions. While the clarification of the Court is useful, it does not prevent abuse from effectively taking place.

A story on the decision is available via Article 19 (Spanish only).