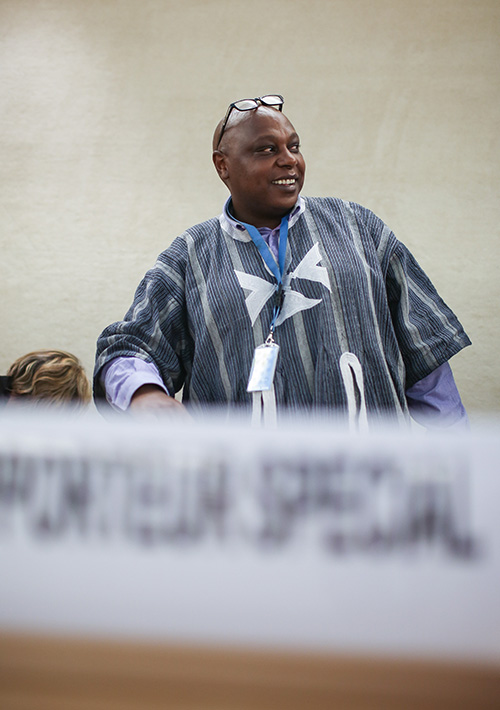 NEW YORK – In his final presentation to the General Assembly today, Maina Kiai reflected on his 5½ years as the United Nations’ first-ever Special Rapporteur on the rights to freedom of peaceful assembly and of association, and warned that the environment for exercising civic freedoms remained hazardous worldwide.

“Unless there is renewed commitment from the world’s leaders, away from fear and control of their own people, and toward respecting the dignity of all, the situation will remain precarious for civil society globally,” the UN expert said.

Kiai noted that his mandate was created at a time – late 2010 – when it was increasingly clear that individuals were demanding a larger say in public affairs and in decisions that affect them. It also covered a period during which the world faced a series of severe crises, ranging from growing poverty and inequality to violent extremism, to climate change, to failing states.

“It was – and still is – a time when assembly and association rights were needed most, as an avenue for people to peacefully speak out, contribute their talents, share their ideas and help society work towards solving its problems,” he said.

Yet many governments have reacted to these crises by taking destructive and counterproductive measures.

“Instead of allowing assembly and association rights to flourish, and instead of listening to what people have to say, they have responded by closing the space for civil society voices and actions,” Kiai said. “The message from this trend is clear: Many of those in power often don’t want to hear what people have to say. They don’t want to upset the status quo, even if that status quo is catapulting us towards obliteration.”

Despite these challenges, the Special Rapporteur emphasized that he was optimistic about the prospects for the global renewal of civic freedoms.

“The energy and determination of civil society in the face of these challenges has been tremendously inspiring,” he said. “I am convinced they will prevail. And I am convinced that once we truly open ourselves to inclusive and constructive dialogue – creating a system in which diverse voices are cherished and valued rather than smothered and squashed – we will also prevail over the grave problems that dog our world today.”

On Thursday, the Special Rapporteur also presented his final report to the General Assembly – a study of the exercise of assembly and association rights in the workplace, with a focus on the world’s most marginalized workers. The report is available here.

The Special Rapporteur’s full statement to the General Assembly is available here.