Three years after Tunisia: thoughts and perspectives on the rights to freedom of assembly and association from UN Special Rapporteur Maina Kiai 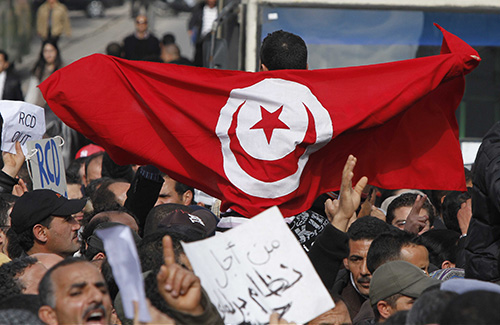 The Journal of Global Ethics has published an essay by Maina Kiai, in which he reflects on the first three years of his mandate, and the global state of assembly and association rights three years after protests exploded in Tunisia, sparking the Arab Spring.

The essay, “Three years after Tunisia: thoughts and perspectives on the rights to freedom of assembly and association from United Nations Special Rapporteur Maina Kiai,” is available for free download to the first 50 people; subsequent access is by purchase only.

Although Kiai’s mandate was created in late 2010 against the backdrop of shrinking space for civil society, a massive and growing global protest movement has grabbed most of the headlines since 2011.

Kiai argues that the mandate has made a measurable impact – having helped raise awareness of repressive NGO laws, provided technical assistance to governments to strengthen assembly and association rights and developed soft law. But perhaps the most important work of the mandate, he argues, has been its contribution to a better understanding of just how important the rights to freedom of peaceful assembly and association are.

“These rights satisfy people’s fundamental desire to take control of their own destinies,” Kiai writes. “They need to speak out, to work together for the common good, to hold their leaders accountable, and to do all of this as an autonomous, self-selected group. These desires are not cultural or specific to a particular place and time. Rather, they are born from our common human heritage, rooted in the simple fact that every civilization is built upon cooperation and collaboration.”

“It is human nature – and human necessity – that people come together to collectively pursue their interests.”

Kiai also argues vehemently against the view that assembly and association rights are inherently dangerous, leading to violence and revolution.

“To be clear,” he writes, “these rights do not inherently foster violence. They, in fact, protect us from it.”

“If anything,” he writes, “the past few years have taught us that the worst turmoil comes when [assembly and association rights are] suppressed. When people are denied something so fundamental, rage inevitably follows. When people have no outlet for that rage, it can ultimately manifest itself as something much more chaotic than a street protest.”

Venezuela must allow peaceful protests and investigate killing of demonstrators, say UN experts
April 28, 2017
View the quotes in your language: