In final appearance before Council, Kiai to present reports on fundamentalism, Chile and South Korea 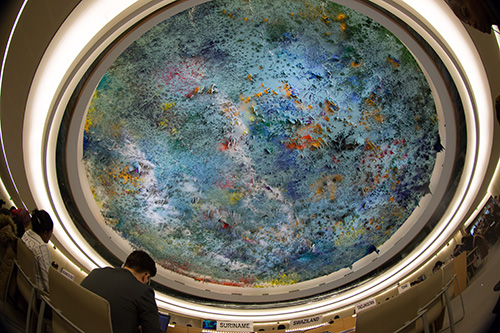 GENEVA – United Nations Special Rapporteur Maina Kiai is in Geneva this week to present his latest reports to the 32nd session of the UN Human Rights Council.

Kiai’s presentation to the Council on June 17 will be his last as Special Rapporteur on the rights to freedom of peaceful assembly and of association (his final report to the Council will be presented by his successor in June 2017).

Kiai will present two reports covering his country visits to Chile and the Republic of Korea and a third focusing on the impact of fundamentalism on assembly and association rights (FOAA rights). A fourth report contains his observations on the mandate’s official communications with UN Member States and replies between March 1, 2015, and February 28, 2016.

The June 17 presentation will take place at the Palais des Nations, Room XX; it is scheduled to start at 9 a.m. The session will be broadcast live on http://webtv.un.org/.

Kiai’s fourth thematic report to the Council examines the role that that fundamentalist ideologies play in restricting assembly and association rights.

Although fundamentalism is often defined in exclusively religious terms, the Special Rapporteur takes a much broader view of the concept in this report. He argues that fundamentalism can and should be defined more expansively, to include any movements – not simply religious ones – that advocate strict and literal adherence to a set of basic beliefs or principles. Adherence to the principles of free market capitalism, for example, has spawned what has been called “market fundamentalism.” And the unbending belief in the superiority of one ethnic group, race, tribe or nationality can lead to what might be called “nationalist fundamentalism.”

This report is not concerned with fundamentalist viewpoints per se – which are protected under the right to hold opinions and beliefs – but rather with fundamentalism in action: concrete, specific violations of the rights to freedom of peaceful assembly and of association that are motivated by these viewpoints.

“The danger arises when holders of these beliefs seek to impose them in a way that controls, restricts or deters the exercise of the rights of others who may have different views or backgrounds, thereby threatening the values of pluralism and broadmindedness, which are central to democracy,” Kiai writes in the report. “The tipping point … is when fundamentalist views form the basis for violations of the rights to freedom of peaceful assembly and of association.”

A separate section of the report examines the related, but distinct, phenomenon of extremism, and the role that assembly and association rights can play in countering its rise.

“Denying people space for peaceful, legal and constructive engagement does not make their feelings of anger, despair and dissatisfaction go away,” Kiai writes in the report. “To the contrary, it simply pushes these feelings underground, where they can fester and turn violent. Extremism thrives in such environments, because it is the only option left.”

The report (A/HRC/32/36) is available via this link: http://freeassembly.net/reports/fundamentalism/

A factsheet summarizing the report is available here: http://freeassembly.net/factsheets/fundamentalism/

Maina Kiai will also present a report on his September 21-30, 2015, official visit to Chile. The report assesses the current state of the rights to freedom of peaceful assembly and of association in the country, and identifies the challenges to fulfilling these rights.

The Chile report (A/HRC/32/36/Add.1) will be released later this week, and will be available at the following link (along with the Government’s response to the report, photos from the mission, and other related materials): http://freeassembly.net/reports/chile/

Maina Kiai’s third report will summarize his official visit to the Republic of Korea, which took place on January 20-29, 2016.

The Republic of Korea report (A/HRC/32/36/Add.2) will also be released this week, and will be available at the following link: http://freeassembly.net/reports/republic-of-korea/

The Special Rapporteur will also present a report covering his observations on communications with Member States and replies received. This report contains all communications to national governments concerning allegations of human rights abuses.

The communications report (A/HRC/32/36/Add.3) will be available at the following link when released: http://freeassembly.net/rapporteurreports/communications-2015-16/

Side-Events at the 32nd Session of the Human Rights Council

While in Geneva, Maina Kiai will also participate in two side-events, including: