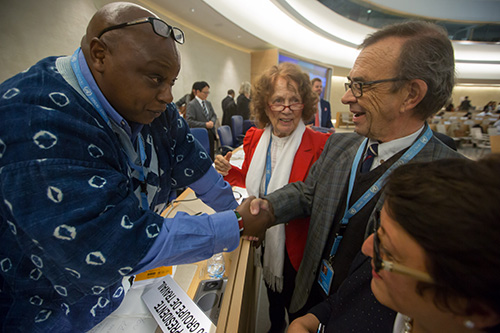 GENEVA – The phenomenon of fundamentalism is fueling growing intolerance worldwide, which poses a grave threat to the rights to freedom of peaceful assembly and of association, United Nations expert Maina Kiai told the Human Rights Council today in presenting his latest report on religious, free market, political, and nationalist or cultural fundamentalism.

“The concept of fundamentalism cannot be limited to religion,” cautioned the UN Special Rapporteur on the rights to freedom of peaceful assembly and of association. “It can and should be defined more expansively, to include any movements – not simply religious ones – that advocate strict and literal adherence to a set of basic beliefs or principles.”

“At its core, this report is about the struggle between tolerance and intolerance,” Mr. Kiai stressed.

“The people of the world speak some 7,000 languages, practice 270 major religions, live in 193 UN Member States and belong to thousands of cultures. But we share only one planet,” the human rights expert said. “We will not always agree. But tolerance towards our differences is the only way to make sure that they do not boil over into violence, oppression and conflict.”

For the Special Rapporteur, the rights to freedom of peaceful assembly and of association are the ‘bedrock’ of such tolerance, because they help ensure that “all of humanity, in its stunning diversity, has a voice.” Despite this, he noted, many States are moving in the wrong direction, promoting fundamentalist viewpoints –whether via government policy or by supporting non-State actors– and suppressing dissent.

“Free market fundamentalism –the belief in the infallibility of free market economic policies– is an urgent threat,” Mr. Kiai said, noting laws in Australia and Canada that potentially criminalize some anti-business protests.

“Economic activity is certainly important, but States tread a dangerous path when they prioritize the freedom of the market over the freedom of human beings. The economic rights of investors should never trump fundamental human rights in the International Covenant on Civil and Political Rights,” he stated.

“The rights to freedom of peaceful assembly and of association unequivocally include the right to assemble and associate for political purposes,” the Special Rapporteur said. “In fact, one of their core purposes is to preserve people’s ability to peacefully express their grievances with political leaders. This may pose a threat to the Government’s hold on power, but this should not be confused with a threat to the State itself. The former is democracy at work; the latter is how autocracies work.”

The independent expert explained that religious fundamentalism also poses a severe threat to the enjoyment of peaceful assembly and association rights, but emphasized that no single religious group has a monopoly on this problem, citing instances of Christian, Hindu, Buddhist, Jewish and Muslim fundamentalism around the world.

“The failure of States to ensure a tolerant environment,” Mr. Kiai noted, “can have catastrophic results.”

“People have an instinctive need to take part in the societies in which they live – to have some control over their destinies, to voice their discontent and to improve their lives. Assembly and association rights allow them to do this, and to do it in a peaceful manner,” Mr. Kiai said.

“Denying these rights does not make peoples’ feelings of anger, despair and dissatisfaction go away. It simply pushes these feelings underground, where they can fester and turn violent,” the human rights expert concluded. “Extremism thrives in such environments, because it is the only option left.”

The Special Rapporteur also presented reports on his official visits to Chile (September 2015) and the Republic of Korea (January 2016).

A full transcript of Maina Kiai’s statement to the Human Rights Council is available at this link (English only).

The report on fundamentalism is available here

A factsheet summarizing the report is available here

Photos of the Special Rapporteur at the Human Rights Council