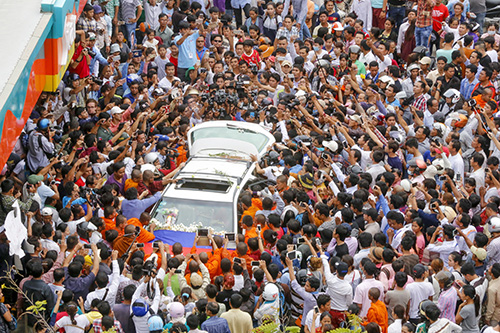 “We are shocked to learn about the death of Mr. Kem Ley. We call for a prompt, thorough and impartial investigation into the crime that ensures no perpetrator goes unpunished. This investigation should be conducted by an independent body with no ties to the government.”

Mr. Kem Ley, who was shot dead at a convenience store in a petrol station on 10 July, was the founder of the grassroots network Khmer for Khmer and a prominent political commentator who had frequently criticised the government. His network had recently registered the Grassroots Democracy Party with the intention of fielding candidates for local elections in 2017. Prior to his civic engagement work, he had had a prominent role in the HIV and health sector for many years.

“The circumstances of Mr. Kem Ley’s death have given rise to deep concerns in view of his standing as a critic of the government and his regular comments in the media highlighting governance and human rights concerns,” the experts said.

The Special Rapporteurs welcomed the Cambodian Government’s commitment for a thorough investigation into the crime, and emphasised that they will be following it closely. “Every person responsible should be brought to justice,” the UN human rights experts stressed.

The UN human rights experts also called upon the Cambodian government to urgently implement effective protection measures to safeguard those active in the civic sphere, against such crimes in the future.

“This shooting exemplifies an alarming negative trend in Cambodia whereby political activists and human rights defenders are facing increasing restrictions to exercise human rights and fundamental freedoms,” the Special Rapporteurs said. “The authorities must act swiftly to reverse this trend as this killing is likely to have a chilling effect on the pursuit of democracy and human rights in Cambodia.”