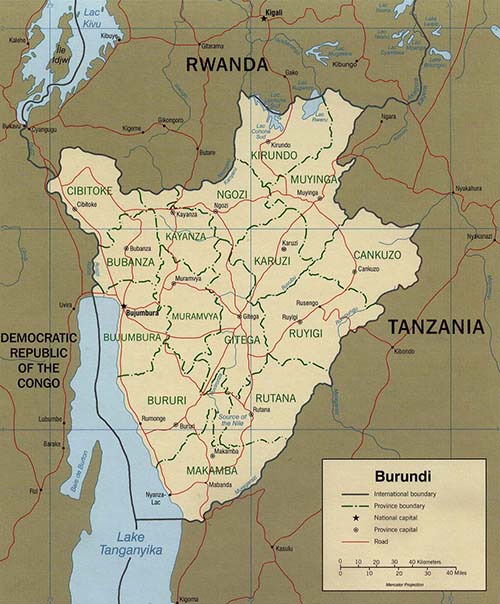 GENEVA – A group of United Nations experts, including Special Rapporteur Maina Kiai, today condemned the violence in Burundi and urged the authorities to uphold human rights, including freedom of expression and the right to peaceful assembly. They also called for a thorough and independent investigation into the human rights violations so that the perpetrators are brought to justice.

Over the past days, Burundi has suffered a wave of killings, arbitrary arrests, intimidation, the closure of media outlets and the targeting of human rights defenders. This has taken place in the context of peaceful protests against the decision of the ruling party to have incumbent President Nkurunziza run for a third presidential term. In response, security forces violently cracked down on the protesters with live ammunition, grenades and tear gas. Most recent reports indicate that the internet is now being blocked throughout the country.

“We urge all parties to resolve differences through dialogue, avoid using inflammatory language or hate speech, and to refrain from violence. This call is also made to various parts of the country’s security sector, which should fulfil their role in a non-partisan manner,” they said.

The international experts emphasised that the troubling events of the past days should also be seen against the increasingly important role that youth militias have played for more than a year. “Authorities must urgently intervene to stop these activities and youth militias of all sides should be immediately disarmed,” they said, warning that “the actions of harassment, intimidation and violence of one militia – the Imbonerakure – are openly condoned by the ruling party.”

“An electoral process that lacks credibility –not to speak about one that triggers outright violence—is a huge setback for Burundi”, the human rights experts highlighted.

Burundi has taken important steps to preserve peace with the Arusha Agreement in 2000, and in particular the adoption of the 2005 Constitution which institutionalizes a power-sharing arrangement between ethnic groups. This has significantly contributed to the transformation of relations between different communities in Burundi.

Massive demobilisation and reintegration efforts, combined with agreed ethnic representation in all official institutions, including across the security sector, have further enabled the country to ensure a degree of stability since 2009.

“These significant achievements made over the past 15 years will be put in jeopardy if the authorities fail to take measures to prevent further violations,” the experts warned. “Burundi must also break with its ‘tradition of impunity’ that has reigned for much too long.”

“In a society, which has witnessed cycles of recurring violence on a massive scale for close to 50 years, and in which victims have seen no redress for the violations suffered, no one can afford another conflict,” they concluded.

The full press release is available in English, French and Chinese via OHCHR.