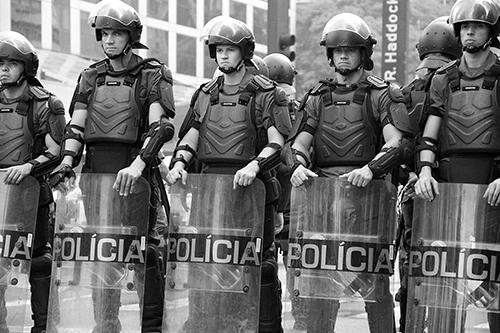 NAIROBI – Special Rapporteur Maina Kiai has written to the Justice Tribunal of São Paulo in Brazil about the recent decision – and subsequent suspension pending appeal – in civil public action case No. 1016019-17.2014.8.26.0053, Public Defender of the State of São Paulo versus the State of São Paulo, which deals with police management of protests.

A local Court decision issued last week had instructed Military Police to develop a police plan for action at demonstrations, a development which Kiai hailed. The decision was suspended by the President of the Court on Nov. 7, however, pending appeal. The President said the exceptional measure was necessary because maintaining the decision would “result in serious injuries to public order and security because it impedes regular police activities.”

Kiai, who is the Special Rapporteur on the rights to freedom of peaceful assembly and of association, said in his letter that he was disappointed to learn of the suspension, as he welcomed the initial decision’s approach and praised the decision for its focus on key details of assembly management. (The original decision can be found here in Portuguese)

The parties are now preparing for the appeal. The suspension order can be read here (Portuguese only).

This report, which was presented to the Human Rights Council in March 2016, contains practical recommendations on police management of assemblies, which Kiai believes will be useful for the Brazilian authorities in preparing the police plan. He encouraged the Court’s President, His Excellency Paulo Dimas de Beliis Mascaretti, to share the practical recommendations with all parties involved in detailing the plan of action.

He also shared with the court his mandate’s “implementation checklist” toolkit report, which was developed by his office to monitor the implementation of the recommendations of the joint report.

This press release is also available in Portuguese.