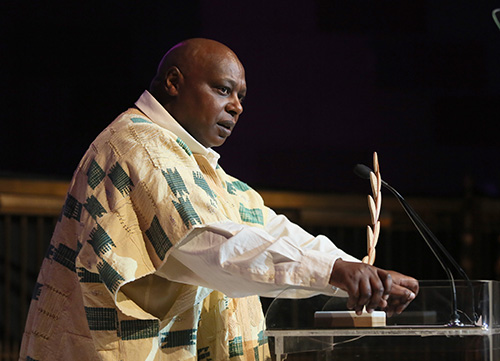 NAIROBI/WASHINGTON – Special Rapporteur Maina Kiai has been named the recipient of the American Federation of Labor and Congress of Industrial Organizations’ (AFL–CIO) 2016 human rights award, and will be in Washington, DC, to accept the honor on Dec. 14, 2016.

The annual prize – known officially as the George Meany-Lane Kirkland Human Rights Award – was created in 1980 to recognize outstanding examples of the international struggle for human rights through trade unions. It is named for the first two presidents of the AFL-CIO.

Kiai, who is the United Nations Special Rapporteur on the rights to freedom of peaceful assembly and of association, is receiving the honor “in recognition of his dedication to and effectiveness in highlighting the widespread denial of fundamental human rights at work and in society.”

The Special Rapporteur has made the issue of assembly and association rights in the workplace a central theme of his mandate, focusing on the subject in his 2016 report to the General Assembly and addressing labor issues extensively during his official visits to UN Member States.

“It is a singular honor to receive the 2016 George Meany-Lane Kirkland Human Rights Award – not only because of its stature, but also because it comes from the labor rights community,” Kiai said. “For far too long we have pigeonholed labor rights and human rights as separate issues, but in this era of closing space to exercise rights, it is essential that we think bigger. Labor rights are human rights, and we are stronger when we forge alliances and work together to achieve our goals.”

Earlier this week, AFL-CIO’s Global Advocacy and Research Coordinator Charlie Fanning wrote in a blog post that Kiai was chosen for the award because he “has raised the profile of worker organizing as essential to defending human rights in a corporate-led, globalized economy.”

“Kiai’s 2016 report to the United Nations makes clear the failure of many industrialized and developing countries to protect and respect human rights at work, often stifling organizing to attract investment from global brands,” Fanning added. “Kiai’s work as special rapporteur makes clear that only a rights-based approach to the challenges of poverty, inequality and injustice will lead to lasting solutions.”

The award will be formally presented during a reception at the AFL-CIO’s offices in Washington, DC, on Dec. 14.

In addition to his work as UN Special Rapporteur, Maina Kiai also co-directs the Nairobi-based NGO InformAction, a community organizing NGO which uses film and community discussions to encourage ordinary citizens to speak out and take action for good governance. He helped found the organization in 2009.

Kiai’s prominence in human rights work began as the founding Executive Director of the NGO Kenya Human Rights Commission in 1992, Kenya most prominent human rights organization. Kiai later became the first Chairman of the official Kenya National Human Rights Commission in 2003-2008, after serving as Director of Amnesty’ International’s Africa Programme (UK) and the Africa Director of the International Human Rights Law Group (US). During the 2007-8 election violence in Kenya, Kiai was notably outspoken about ethnic divisions and the need to hold leaders accountable. In 2014, Freedom House awarded Kiai its Freedom Award for his work in Kenya.

For more about the AFL-CIO, please see here.