Discussion: Assembly and association rights for the world’s most marginalized workers 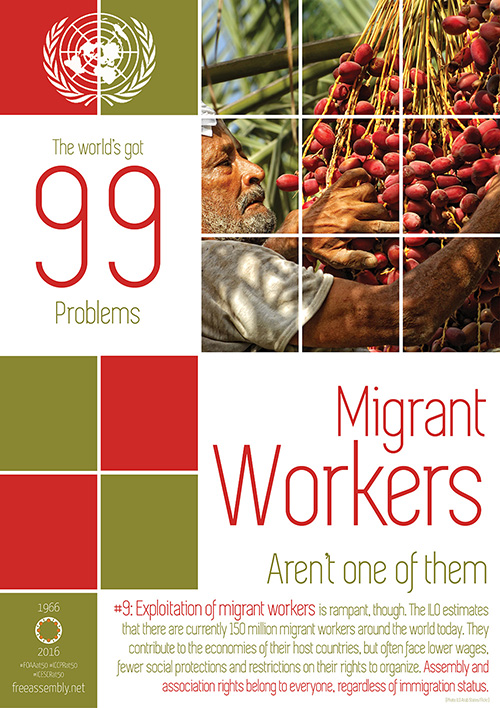 The globalization of the world economy in the past half-century has contributed to a dramatic rise in the power of large multinational corporations and has concentrated wealth in fewer hands. State power to regulate these business entities, meanwhile, has been simultaneously eroded and co-opted by elite economic actors themselves.

Unconstrained power – whether public or private in origin – is now, more than ever, a critical threat to the protection of human rights. This power shift has created a challenging environment for the enforcement of human rights, as Special Rapporteur Maina Kiai has documented in his two most recent reports on natural resource exploitation and the imbalance between how States treat businesses and civil society.

For his next report to the UN General Assembly (October 2016), the Special Rapporteur plans to explore a new dimension of this power shift: its effect on the rights to freedom of peaceful assembly and of association of workers – specifically the most marginalized portions of the world’s labor force, such as global supply chain workers, informal workers, migrant workers and domestic workers. He will also examine gender and racial dimensions of the issue.

The Special Rapporteur is particularly interested in the links between the political, social, and economic exclusion of workers, their associations and trade unions, as expressed in:

The Special Rapporteur will also explore the interplay between the lack of assembly and association rights for workers and the health of these rights within a society as a whole.

What’s your opinion and experience?
The Special Rapporteur convened an expert consultation to discuss this subject in May 2016. But he would also like to hear your views. He is particularly interested in specific, real-world examples of how the assembly and association rights of workers are being both eroded and bolstered. These examples may be included in the report.

How to submit information for the report
For more details on the report, please see our concept note. For specific questions that the Special Rapporteur is looking to answer, please see the following questionnaires. Note that each file has three separate questionnaires: One for UN member states, one for businesses and one for civil society/unions/workers. Please answer only the questionnaire that corresponds to your position:

In responding to the questionnaire, please be sure to provide as much detail as possible and to specify which countries you are referring to.

Completed questionnaires should be e-mailed to freeassembly@ohchr.org. We will be accepting submissions until June 30, 2016. You may submit your responses in English, French or Spanish.

Discussion: Mapping the history and achievements of civil society over the past decade
December 16, 2016