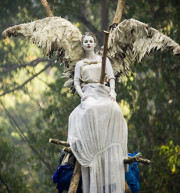 GENEVA – Three United Nations human rights experts have urged the State Parliament of Western Australia not to adopt new legislation which would result in criminalising lawful protests and silencing environmentalists and human rights defenders. Members of the regional parliament have indicated that the Bill aims at preventing protestors from locking themselves onto equipment, trees, and other objects with innovative methods in order to frustrate or delay development sites. The anti-protest Bill is scheduled to be debated on Tuesday 16 February. “If the Bill passes, it would go against Australia’s international obligations under international human rights law, including the rights to freedom of opinion and expression as well as peaceful assembly and association,” said the UN Special Rapporteurs on freedom of expression, David Kaye, on freedoms of peaceful assembly and association, Maina Kiai, and on human rights defenders, Michel Forst. “The Bill would criminalise a wide range of legitimate conduct by creating criminal offenses for the acts of physically preventing a lawful activity and possessing an object for the purpose of preventing a lawful activity,” they explained. “For example, peaceful civil disobedience and any non-violent direct action could be characterized as ‘physically... Continue reading →