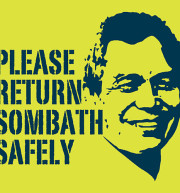 GENEVA – International support is now needed to investigate the enforced disappearance of a leading Laotian human rights defender, a group of United Nations independent experts, including Maina Kiai, said today. Human rights activist Sombath Somphone has been disappeared since December 2012. “It is high time for the authorities of the Lao People’s Democratic Republic (PDR) to voluntarily request international assistance with the aim of shedding light on Mr. Somphone’s fate and whereabouts, two years after his disappearance,” the experts said. “International law makes clear that the Government of the Lao People’s Democratic Republic has the duty to carry out an independent, thorough, credible and effective investigation.” Mr. Somphone is a prominent human right activist working on issues of land confiscation and assisting victims in denouncing such practices. He was last seen at a police check point with his car parked in the police compound. “We urge the authorities to release more information about the progress of investigation, especially to his family,” the independent experts stressed. “In the absence of any tangible progress, we strongly recommend that an international team of experts work jointly with the Lao People’s Democratic Republic’s to fulfil its legal... Continue reading →