This page summarizes cases raised with South Korea (the Republic of Korea) by the Special Rapporteur between May 1, 2011, (when the Special Rapporteur took up his functions) and February 28, 2017 (the date of the last public release of communications). Communications are released to the public once per year. This page also contains observations on these communications and on responses received from South Korea. Communications and observations are divided into sections based upon which observation report they originally appeared. Each communication is referenced as urgent appeal (UA), allegation letter (AL), joint urgent appeal (JUA) and joint allegation letter (JAL) - the hyperlinks lead to these documents. This is followed by the date the communication was issued, as well as the case number and the State reply (also hyperlinked if available). Summaries and communications are published only in the language of submission (in the case of South Korea, English). First Report (May 1, 2011 to March 15, 2012) None Second Report (March 16, 2012 to February 28, 2013) Joint allegation letter, 30/05/2012. Case no. KOR 2/2012. State Reply: 02/01/2013. Alleged acts of harassment, intimidation and ill-treatment of peaceful protesters in Gangjeong village. Observations The Special Rapporteur thanks the... Continue reading → 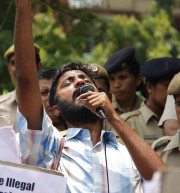 Maina Kiai and other UN experts have called for a halt to the construction of a steel plant in India, due to serious human rights concerns. The plant in Odisha, India, reportedly threatens to displace over 22,000 people in the Jagatsinghpur District, and disrupt the livelihoods of many thousands more in the surrounding area. The project is backed by multinational steel corporation POSCO, which is based in the Republic of Korea. According to the UN Special Rapporteur on freedom of peaceful assembly and association, Maina Kiai, “people in the project-affected area have reportedly been subjected to violence, harassment and intimidation, as well as arbitrary detentions and false charges, as a result of their activities to assemble peacefully and collectively defend their human rights.” The full press release is available in English and Chinese via... Continue reading →