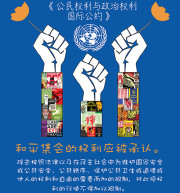 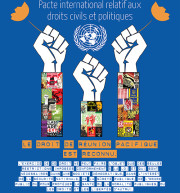 News | #FOAAat50: Celebrating a half-century of assembly and association rights through art, social media and a yearlong party 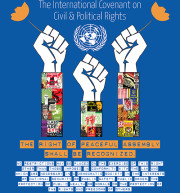 (Español • français • 中文) We’re now well into the second month 2016 (and two days into the Year of the Monkey), but there has been surprisingly little buzz surrounding one of the year’s most important anniversaries: The world’s core international human rights treaties are turning 50. That's a disappointing situation - and we'd like your help in trying to fix it. The International Covenant on Civil and Political Rights (ICCPR) and the International Covenant on Economic, Social and Cultural Rights (ICESCR) were both adopted by the UN General Assembly on December 16, 1966. The ICCPR, of course, enshrines the international rights to freedom of peaceful assembly and of association in articles 21 and 22, respectively. The ICESCR, protects the right to form trade unions and to strike. Together, these instruments create the legal backbone of the Special Rapporteur’s mandate. It was a long road to adoption and ratification, and we’re still not there yet (as United Nations data shows, 29 states are still not party to the ICCPR, while 33 are not party to the ICESCR). Implementation has also been imperfect, no doubt. But the ICCPR and ICESCR – together with the Universal Declaration of Human Rights – represent the most ambitious and collaborative attempts at defining and upholding... Continue reading →