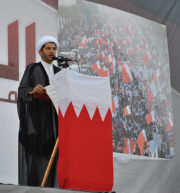 GENEVA – The UN Special Rapporteur on freedom of opinion and expression, David Kaye, today condemned the sentencing to nine years imprisonment on charges of inciting violence of Sheikh Ali al-Salman, the leader of the Wefaq opposition party in Bahrain. The expert’s call comes after a Bahraini court of appeal on Monday more than doubled his prison term, up from an earlier four years. “The sentencing of Sheik Ali al-Salman seems to confirm a worrying trend of political repression further shrinking the space for any form of dissent in Bahrain today,” the human rights expert said. “The arbitrary sentencing of such a prominent political leader to nine years of detention inevitably has a strong chilling effect for the entire society.” “The fact that the sentence against Ali al-Salman was not only confirmed, but doubled following various statements indicating international concern on his trial, is deeply disappointing,” he said while recalling that last September the UN Working Group on Arbitrary Detention had concluded that his detention was arbitrary. Mr. Kaye’s statement has also been endorsed by the Working Group on Arbitrary Detention; the Special Rapporteur on the rights to freedom of peaceful assembly and of association, Maina Kiai; the Special Rapporteur on freedom of religion or... Continue reading → 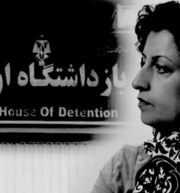 GENEVA – A group of United Nations experts, including Maina Kiai, expressed outrage today at the recent conviction and sentencing of Narges Mohammadi, a prominent activist and human rights defender, to 16 years’ imprisonment by a Revolutionary Court in Tehran, and called for her immediate and unconditional release. On 18 May 2016, Ms. Mohammadi’s lawyer announced that Iran’s judiciary had sentenced his client to 16 years in prison for her activities on behalf of a grassroots organization calling for the abolition of the death penalty, ‘assembly and collusion against national security’, and for ‘propaganda against the state’. She was allegedly tried behind closed doors. Prior to her arrest on 5 May 2015, the human rights defender was subjected to constant harassment, verbal assaults and interrogations for her peaceful human rights activities. Ms. Mohammadi, who suffers from a critical neurological condition, had previously been sentenced to six years in prison. “There is absolutely no reason why Narges Mohammadi should spend one more hour in prison, let alone 16 years,” said the UN Special Rapporteur on the situation of human rights in the Islamic Republic of Iran, Ahmed Shaheed. “I call on all the relevant authorities in Iran, including President Rouhani, to do their utmost... Continue reading → 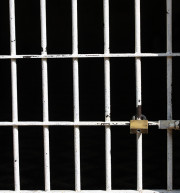 GENEVA – A group of United Nations human rights experts, including Maina Kiai, today warned that over a dozen political prisoners in Iran, including some prominent human rights defenders, lawyers and political activists, are at risk of death in detention due to their worsening health conditions and the continued refusal by the Iranian authorities to provide them with medical treatment. “The condition of several prisoners of conscience with serious health problems has been exacerbated by their continued detention and by repeated refusals to allow their access to the medical facilities and treatment they so urgently require,” the experts said. “The denial of medical care, physical abuse, either in overcrowded prisons or in solitary confinement and other forms of torture and ill-treatment exposes prisoners to risk of serious injuries and death,” they said noting that “unfortunately, Iranian prisons are no strangers to such tragedies, many of which could have been avoided if authorities exercised proper care.” The UN experts highlighted the cases of political prisoners Mohammad Hossein Rafiee Fanood and Kamal Foroughi, human rights defender Nargis Mohammadi, lawyer Abdulfattah Soltani, blogger Hossein Ronaghi Maleki, religious figure Sayed Hossein Kazemeyni Boroujerdi and experimental... Continue reading → 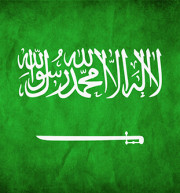 GENEVA – United Nations human rights expert David Kaye today expressed grave concern at the growing repression of freedom of expression in Saudi Arabia. He noted a string of severe punishments against individuals for the holding and expressing of opinions, including human rights defenders and bloggers, Raif Badawi and Mikhlif al Shammari, and the poet Ashraf Fayadh. “As the world struggles to fight terrible forms of violence, national authorities everywhere should avoid the targeting freedom of expression, especially against those who advocate tolerance, respect and human rights,” the UN Special Rapporteur on the right to freedom of opinion and expression said. Several prominent writers and artists have been punished severely for expressing their beliefs in Saudi Arabia. Mr. Badawi, recently awarded the Sakharov Human Rights Prize, is a well-recognized human rights defender sentenced in 2014 and flogged in January, when he received 50 public lashes. His health has since deteriorated and authorities have reportedly transferred him to an isolated detention facility and are considering a new round of flogging. Mr. Al Shammari was convicted this month for ‘stirring up public opinion’ for his work advocating for reconciliation between Shia and Sunni communities via Twitter. And Mr. Fayadh, the... Continue reading →

News | Bahrain: Freed from jail, now all charges against Nabeel Rajab must be dropped 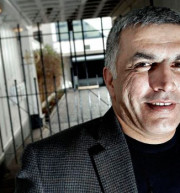 GENEVA – Three United Nations human rights experts, including Maina Kiai, today call on the Bahraini authorities to drop all charges the prominent Bahraini human rights defender Nabeel Rajab, who was released from prison earlier this week for health reasons. While welcoming Mr. Rajab’s release, the experts called it “only a half measure, given that the he is still facing charges that carry up to fifteen years of imprisonment.” Mr. Rajab, who is the president of the Bahrain Centre for Human Rights, was jailed in October 2014 in connection with statements made on his Twitter account and was initially charged for ‘publicly insulting official institutions.’ This was only months after he had completed a two-year prison sentence after calling for and participating in peaceful demonstrations. Despite his recent release, Mr.Rajab’s pending charges include ‘disseminating false rumours in the time of war,’ ‘insulting public officials’ and ‘disseminating false news causing damage to the public security.’ “Criminalizing, prosecuting and imprisoning human rights defenders for carrying out their vital human rights work and enriching public debate are unacceptable under international law,” the experts stressed. “Human rights defenders in Bahrain must be able to carry out their... Continue reading → 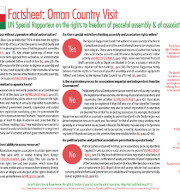 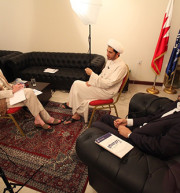 GENEVA – A group of United Nations independent experts, including Special Rapporteur Maina Kiai, today urged the Bahraini authorities to release Sheikh Ali Salman, an opposition politician and a religious figure who was refused bail on charges that include inciting a change of regime by non-peaceful means. Sheikh Salman is secretary-general of the Al Wefaq National Islamic Society, Bahrain’s main opposition political party. His arrest in December 2014 came shortly after he was re-elected to his post. “The charges appear to stem from the Government’s dissatisfaction with opinions that Sheikh Salman expressed in public speeches and televised interviews, in which he called for the establishment of a democratic regime and for Government accountability,” the human rights experts said. “If this is indeed the case, his arrest and prosecution would amount to a breach of his fundamental human rights to freedom of expression, freedom of association and freedom of religion or belief,” they said. “We have asked the Government of Bahrain to clarify the situation and to provide more information on these allegations.” The UN experts also expressed concern at allegations that Sheikh Salman’s hearing on January 28, when he was denied bail, did not take place in accordance with due process... Continue reading →

GENEVA – A group of United Nations independent experts has urged the Government of Oman to release Said Ali Said Jadad, a prominent human rights defender who has been advocating for democratic reforms in the country and has been repeatedly detained. Mr. Jadad’s latest detention took place on 21 January, without an arrest warrant. Mr. Jadad is scheduled to be transferred from the Police Headquarters in Salalah to appear in court in Muscat in the coming days, on charges of undermining the prestige of the state, incitement to sit-ins and demonstrations, steering up sectarian strife and offending state officials. “This is not the first time that I have been informed about acts of reprisals against Mr. Jadad following my official visit to Oman in September 2014,” the Special Rapporteur on the rights to freedom of peaceful assembly and of association, Maina Kiai, said. “Mr. Jadad has been repeatedly detained since 10 December and I am worried that he was arrested for having met with me during my visit.” “I urge the Omani Government to ensure the safety of Mr. Jadad and to guarantee that no human rights defender in the country is subjected to any form of reprisals – including threats, harassment, imprisonment or judicial proceedings,” Mr. Kiai stated. The Special Rapporteur on the... Continue reading → 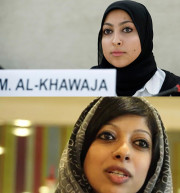 GENEVA – A group of United Nations independent human rights experts, including Maina Kiai, has urged the government of Bahrain to drop charges against three women human rights activists exercising their rights to free expression and free association. “Deprivation of liberty on the sole ground of having exercised the right to free expression may be considered arbitrary,” the experts warned. Ms. Maryam Al-Khawaja, the co-director of the Gulf Centre for Human Rights, was sentenced on 1 December, in absentia, for allegedly assaulting airport security officers. Her sister, Ms. Zainab Al-Khawaja, a women’s rights and social media activist in Bahrain, was sentenced on 4 December to three years in prison and fined 3,000 BHD (7,900 USD) for tearing a picture of Bahrain’s King during a court hearing in October. Several days later, she was sentenced to an additional year for “insulting a public servant” and is facing further charges for insulting a police officer and trespassing. The two women activists are daughters of Mr. Abdulhadi al-Khawaja, the former president of the Bahrain Centre for Human Rights, who has been in detention since 2011 and was the subject of numerous calls by UN experts for his release. Ms. Ghada Jamsheer, head of the Women’s Petition Committee, a network of Bahraini... Continue reading → 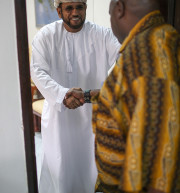 Maina Kiai undertook an official mission to the Sultanate of Oman Sept. 8-13, 2014. The visit was carried out pursuant to his mandate to assess the situation of freedoms of peaceful assembly and association in the country. During his six-day visit, Mr. Kiai met State officials, members of the judiciary and of Parliament, representatives of the National Human rights Commission and members of civil society. At the conclusion of his visit, the Special Rapporteur congratulated Oman at a press conference for its remarkable economic development over the past 40 years, but said that it was now "time for Oman to build on these achievements by adopting a human rights and people-centred approach that can lead to the full enjoyment of fundamental rights and freedoms, including rights to freedom of peaceful assembly and of association." The expert noted a “consistent focus” on maintaining peace, order and stability in the country, which is often used for limiting assembly and association rights. This, in turn, creates “a pervasive culture of silence and fear affecting anyone who wants to speak and work for reforms in Oman,” he stressed, noting that some activists “reported reprisals, before and during my visit, following their attempts to contact or meet with me.” “Stability is certainly... Continue reading →