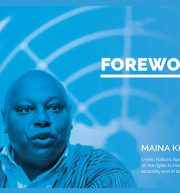 The following is adapted from the Special Rapporteur Maina Kiai's foreword to the Civic Charter - the Global Framework for People's Participation, which was facilitated by the International Civil Society Centre and released in October 2016: It is no secret that our world faces a multitude of problems in the early years of the 21st century: growing poverty and inequality, violent extremism, intolerance of “the other,” potentially catastrophic climate change, and failing states, just to name a few. Indeed these problems sometimes seem so vast and complex that it is easy to despair. But our biggest difficulty, truly, is that so many of us are excluded from having a say in how to solve these problems. Billions of people – indeed the majority of the world – are cut off in their ability to contribute their talents, share their ideas and express their wishes. I observe this gap each and every day in my work as UN Special Rapporteur on the rights to freedom of peaceful assembly and of association. The space for meaningful participation in many of our societies – from repressive authoritarian regimes to the “traditional” democracies – has been hijacked. Sometimes this is done structurally, through repressive legislation that closes off democratic space. Other times it is blunter, through... Continue reading →