This page summarizes cases raised with Brazil by the Special Rapporteur between May 1, 2011, (when the Special Rapporteur took up his functions) and February 28, 2017 (the date of the last public release of communications). Communications are released to the public once per year. This page also contains observations on these communications and on responses received from Brazil. Communications and observations are divided into sections based upon which observation report they originally appeared. Each communication is referenced as urgent appeal (UA), allegation letter (AL), joint urgent appeal (JUA) and joint allegation letter (JAL) – the hyperlinks lead to these documents. This is followed by the date the communication was issued, as well as the case number and the State reply (also hyperlinked if available). Summaries and communications are published only in the language of submission (in the case of Brazil, English). First Report (May 1, 2011 to March 15, 2012) None Second Report (March 16, 2012 to February 28, 2013) Joint allegation letter, 05/07/2012. Case no. BRA 7/2012. State Reply: 24/04/2013. Alleged killing of human rights defenders. Joint allegation letter, 19/07/2012. Case no. BRA 8/2012. State Reply: None to date. Allegations of acts of harassment, intimidation and... Continue reading → 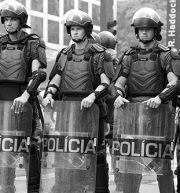 (Português) NAIROBI - Special Rapporteur Maina Kiai has written to the Justice Tribunal of São Paulo in Brazil about the recent decision – and subsequent suspension pending appeal – in civil public action case No. 1016019-17.2014.8.26.0053, Public Defender of the State of São Paulo versus the State of São Paulo, which deals with police management of protests. A local Court decision issued last week had instructed Military Police to develop a police plan for action at demonstrations, a development which Kiai hailed. The decision was suspended by the President of the Court on Nov. 7, however, pending appeal. The President said the exceptional measure was necessary because maintaining the decision would “result in serious injuries to public order and security because it impedes regular police activities." Kiai, who is the Special Rapporteur on the rights to freedom of peaceful assembly and of association, said in his letter that he was disappointed to learn of the suspension, as he welcomed the initial decision’s approach and praised the decision for its focus on key details of assembly management. (The original decision can be found here in Portuguese) “While I have general reservations on the role to play by Military Police instead of civil authorities in the management of assemblies... Continue reading → 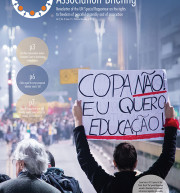 Issue No. 17 of the Assembly and Association Briefing, the newsletter of Maina Kiai, UN Special Rapporteur on the rights to freedom of peaceful assembly and of association. In this issue: • UN experts warn that Brazil anti-terrorism law may threaten fundamental freedoms • Kiai urges European Court to establish “clear and strong standards” on assembly rights • Burundi: Experts urge Security Council to follow resolution with ‘concrete’ steps • Bangladesh NGOs: Kiai warns against proposed funding bill • Special Rapporteur urges Chile to scrap proposed ‘identity check’ bill • High time to protect sexual and reproductive rights defenders in the Americas • Civil society needs ‘new tactics’ to reverse shrinking space, Special Rapporteur tells Asia-Pacific activists in Seoul • Background reports compare laws on businesses and CSOs in 34 states • Freedom of association and assembly: By the numbers • Special Rapporteur news in brief: November-December 2015 • World briefing: Freedom of assembly and association in the news For a link to the newsletter, click on the image at right or click here (4.1MB file) or here (6.8MB full resolution file). To subscribe to our newsletter, please drop us a line at info@freeassembly.net with the subject line... Continue reading →

Portugues GENEVA – Proposed anti-terrorism legislation currently being considered by Brazil’s Congress is too broadly drafted and may unduly restrict fundamental freedoms, warned today a group of UN Special Rapporteurs including Maina Kiai. “We fear that the definition of the crime established by the draft law may result in ambiguities and confusion as to what the State considers a terrorist offence, potentially undermining the exercise of human rights and fundamental freedoms,” the independent experts said. Law N° 101/2015 seeks to define crimes of terrorism in Brazil and provides for other investigative and procedural provisions. On 28 October 2015, the Brazilian Senate passed the legislation by 34 votes to 18. The amended text now returns to the lower house. “We regret that the current draft excluded a previous article establishing an important safeguard that would protect participation in political demonstrations and social movements from falling under the legislation’s scope,” the experts said. The Special Rapporteurs shared their concerns with the Brazilian authorities, who in turn provided further clarifications on the draft law. “States have a duty to protect civil society and the rights that are critical to its existence and development, such as the rights to... Continue reading →