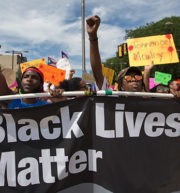 GENEVA / WASHINGTON, DC – The United States of America is struggling to live up to its ideals in the area of racial, social and economic inequality, which is having a negative impact upon the exercise of the rights to freedom of peaceful assembly and of association, United Nations human rights expert Maina Kiai said at the end of his first official fact-finding mission to the country. The UN Special Rapporteur on the rights to freedom of peaceful assembly and of association singled out race as a particularly pernicious issue. He emphasised that while his mandate does not cover racial discrimination, it was impossible carry out his mission “without issues of racism pervading the discussions.” “Racism and the exclusion, persecution and marginalization that come with it, affect the enabling environment for the exercise of association and assembly rights,” Mr. Kiai said, noting that understanding its context means looking back at 400 years of slavery and post-Civil War Jim Crow laws which “enforced segregation and marginalized the African-American community to a life of misery, poverty and persecution.” In more recent times, the Special Rapporteur noted, “old philosophies of exclusion and discrimination were reborn, cloaked in new and euphemistic terms,” such as the so-called “War on... Continue reading →