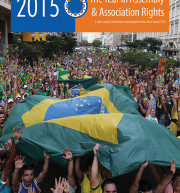 The events of 2015 unfolded as another epic, global tug-of-war over the role that assembly and association rights play in our world today. At certain times and in some places, they appeared inexorable – the lifeblood of citizen movements and a vehicle for the voices of ordinary people. At others, they were under siege, on the verge of going extinct. On the one hand, the year saw an emphatic continuation of the global trend of massive protest movements. Activists in dozens of countries successfully harnessed public discontent, drew unprecedented numbers to rallies and commanded attention, both at home and abroad. The common thread was, as with 2014, people’s anger over government abuse of power. Burundi exploded with anti-government protests after Pierre Nkurunziza announced he would be running for a third term that most said was illegal; conflict continued after he won that third term. People in Brazil, Malaysia, Moldova and elsewhere took to the streets in extraordinary numbers to protest against government corruption. And in Guatemala, a similar movement succeeded in ousting the President. The Republic of Korea, Japan, the United States of America and South Africa saw huge gatherings over social issues ranging from labor policies to militarization to police brutality to education. And... Continue reading →