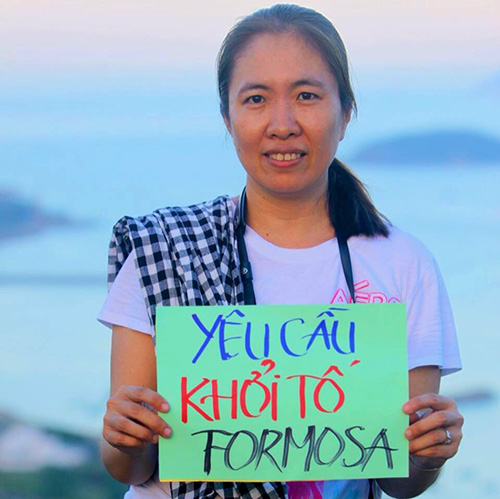 GENEVA – UN human rights experts urge the Government of Viet Nam to immediately release a popular blogger known as Mother Mushroom, who has been detained incommunicado since October last year.

Ms. Nguyen Ngoc Nhu Quynh, a 37-year-old environmental human rights defender, is accused of spreading propaganda against the Government. The charges are linked to her online activities that were critical of the Government.

Among the issues she tackled was an incident involving the dumping of toxic chemicals in April 2016, which polluted local waters and killed a large number of fish. Ms. Quynh demanded greater governmental accountability for the environmental damage. Ms. Quynh has been blogging about human rights abuses since 2006, and she was named Civil Rights Defender of the year in 2015 by the civil society organization Civil Rights Defenders.

“We are deeply concerned that Ms. Quynh is being detained because of the exercise of her right to freedom of opinion and expression on a matter of public interest,” the experts emphasized. “We fear for her physical and psychological integrity, and denounce the violations of her fundamental right to due process, in particular her being detained incommunicado, the denial of her right to legal counsel and the banning of visits from her family.”

The experts also pointed out that Ms. Quynh has faced continuous intimidation by the Government for almost eight years. “This includes frequent travel bans, physical assaults and threats,” the experts said, “just for promoting human rights through social media and for trying to protect the environment on which we all rely.” She has also been prevented from participating in peaceful protests.

“As an environmental human rights defender, Mother Mushroom should be honoured for her courage and perseverance in defending the environment and human rights for years without fear,” the experts stressed.

“Bloggers such as Ms. Quynh help to ensure that the public has access to information about environmental threats that affect their health and well-being,” the experts stated. “Her prolonged detention sends a negative signal to the public that their right to information is not respected”.

The experts have already been in contact with the Government about the situation, reiterating the call made by the UN High Commissioner for Human Rights for her release last October.