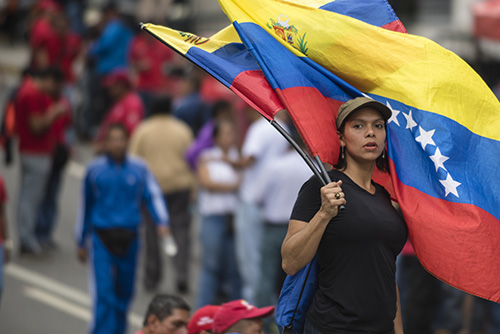 GENEVA – The Government of Venezuela must facilitate peaceful protests and properly investigate the deaths of at least 25 people in recent demonstrations, say a group of United Nations human rights experts.

“We are gravely concerned about allegations of excessive and indiscriminate use of force during the protests, as well as arbitrary detentions and killings,” the experts said.

“Any such actions would constitute serious violations of the rights to life, not to be deprived arbitrarily of liberty, to freedom of peaceful assembly and freedom of expression,” they added.

Hundreds of persons have also been injured and more than 850 people arrested in the protests, which began in 2015 against a backdrop of economic and social unrests.

The demonstrations became more intense after a ruling last month by the country’s Supreme Tribunal of Justice that it could assume the legislative powers of the opposition-controlled National Assembly. The decision was later reversed, but the protests have continued.

“Political tensions are high at the moment, and public opinion appears sharply divided, but this is precisely when governments should do most to protect people’s rights” the experts stressed.

“The people of Venezuela need space for peaceful, constructive dialogue – with each other and with their leaders.”

The experts drew particular attention to a new measure introducing an automatic military response to demonstrations. The measure, brought into effect in April 2017 and known as the Zamora Plan, also calls on groups of armed civilians and police to assist.

“The increasingly militarized response is counter-productive because it only increases tensions and heightens the risk of injury and death. Peaceful demonstrations should be facilitated, not treated as an inherent threat to security,” the UN experts said.

“Demonstrations should ordinarily be managed with no resort to force. Any use of force should be strictly necessary and proportional to a specific threat. Peaceful demonstrations, in and of themselves, are not a threat. Institutionalizing the use of a militarized response suggests that the Government thinks otherwise.”

The experts noted reports that paramilitary groups had also used force to suppress demonstrations, occasionally joining with the uniformed authorities.

In the state of Lara, paramilitaries reportedly killed three protesters. In 16 other states, there have been reports of armed groups provoking and harassing demonstrators with the support of state authorities.

The UN human rights experts also criticized the increasing criminalization of protests in Venezuela and the use by Government officials of media outlets to stigmatize opposition demonstrators as foreign-supported terrorists.

This press release is also available in Spanish at this link.