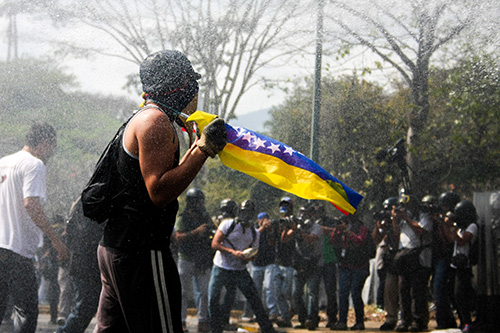 GENEVA – Two United Nations human rights experts today called on the Venezuelan Government to guarantee the security of all individuals ahead of Sunday’s parliamentary elections, and to urgently remove all obstacles to peaceful public participation.

“Reinstituting full space for the freedoms of expression, association and assembly, and ensuring accountability in all reports on violence is key to dissipating political tensions in Venezuela and to ensuring democratic governance,” said the Special Rapporteurs on freedom of expression, David Kaye, and on the rights to freedom of peaceful assembly and of association, Maina Kiai.

“Authorities must ensure the safety of those trying to exchange ideas in the last days of the electoral process,” the experts said, recalling the recent killing of opposition politician Luis Manuel Díaz following a campaign rally in Guárico state. There have also been reports of attacks against other peaceful political events just days before the 6 December vote.

“The killing of Luis Manuel Díaz is a very worrying sign of how the environment for political participation in Venezuela has deteriorated,” they warned. “A peaceful electoral process requires, at a bare minimum, that the Government guarantee the security of all – particularly at political events – regardless of political views.”

The UN human rights experts also noted that the attacks were only “the tip of the iceberg,” and that they were “emblematic of deeper, more systematic challenges for public participation in Venezuela.”

“A vast array of cumulative restrictions on the rights to freedom of expression, assembly and association has been building up over the past few years in Venezuela,” Mr. Kaye stated. “These have narrowed space for the open and free debate required during any electoral process”.

The independent expert stressed that “without ensuring freedom of expression to all, it is impossible to have open, free and fair political processes.”

Special Rapporteur Kiai stressed the need to secure the right of people to peacefully assemble and publicly demonstrate their opinions prior and after elections: “Democracy requires a year-round commitment to creating an environment where people can express political opinions, organize for political purposes and peacefully assemble – all without fear of retribution.”

The experts also pointed to the arbitrary detention of prominent opposition leaders such as Leopoldo López and Antonio Ledezma, emphasizing that political debate cannot be open when politicians are arbitrarily detained.

The Special Rapporteur on freedom of expression also noted that restrictions on the media have created further obstacles to public debates. “Civil and criminal actions against independent newspapers and journalists have a clear chilling effect. Initiatives to punish reporting on certain subjects and threats to revoke broadcasting licenses are incompatible with international standards,” Mr. Kaye said.

The UN independent experts shared their concerns through a communication sent to the Venezuela authorities and reiterated that they remain ready to work in the future to identify steps to address them.