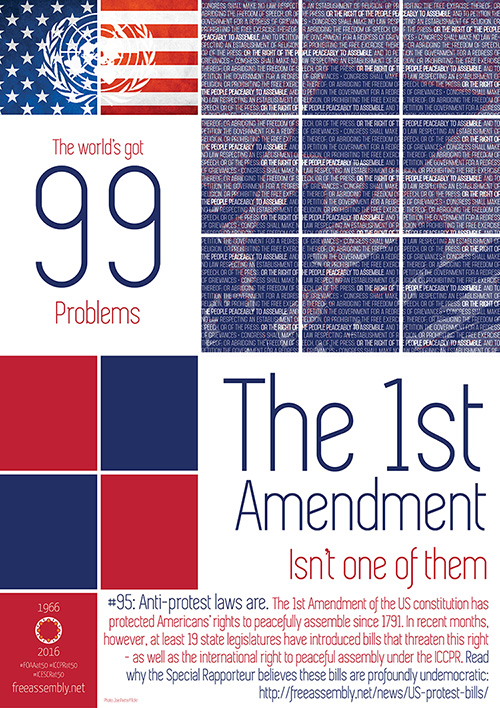 GENEVA – Two UN human rights experts are calling on lawmakers in the United States to stop the “alarming” trend of “undemocratic” anti-protest bills designed to criminalize or impede the rights to freedom of peaceful assembly and expression.

Since the Presidential Elections in November, lawmakers in no fewer than nineteen states have introduced legislation restricting assembly rights by various degrees. The moves come just as the United States is seeing some of the largest and most frequent protests in its history.

“Since January 2017, a number of undemocratic bills have been proposed in state legislatures with the purpose or effect of criminalizing peaceful protests,” the experts said.

“The bills, if enacted into law, would severely infringe upon the exercise of the rights to freedom of expression and freedom of peaceful assembly in ways that are incompatible with US obligations under international human rights law and with First Amendment protections. The trend also threatens to jeopardize one of the United States’ constitutional pillars: free speech.”

Concerns about the implication of these bills were recently raised by the experts in a recent communication sent to the US authorities on 27 March 2017. The bills come amid a wave of US protests over the past few years which have intensified in recent months.

“From the Black Lives Matter movement, to the environmental and Native American movements in opposition to the Dakota Access oil pipeline, and the Women’s Marches, individuals and organizations across society have mobilized in peaceful protests, as it is their right under international human rights law and US law,” the experts said.

“These state bills, with their criminalization of assemblies, enhanced penalties and general stigmatization of protesters, are designed to discourage the exercise of these fundamental rights.”

In Indiana, Senate Bill No. 285 would allow law enforcement officials to “use any means necessary to clear the roads of people unlawfully obstructing vehicular traffic”. Several bills, such as those proposed in Arkansas, Florida, Georgia, Indiana, Iowa, Michigan, Minnesota and Missouri, disproportionately criminalize protestors for “obstructing traffic”.  One Missouri bill proposes a prison term of up to seven years for “unlawful obstruction of traffic”.

Other bills in Florida and Tennessee would have the effect of exempting drivers from liability if they accidentally hit and even kill a pedestrian participating in assemblies. Bills in Florida, Indiana, Minnesota and Missouri refer to what they consider “unlawful” or unauthorized assemblies, and in Minnesota and North Carolina, individuals could be liable for the total public cost of ending “unlawful assemblies”.

In Minnesota, the proposed bill could have the effect of criminalizing peaceful protesters for participating in demonstrations that turn violent or result in property damage – even if those protesters did not personally participate in the violence or property damage.

In Colorado, North Dakota and Oklahoma, several bills proposed as a response to the protests organized by activists and opponents of the Dakota Access Pipeline in North Dakota, would have a chilling effect on environmental protestors.

The experts took particular issue with the characterization in some bills of protests being “unlawful” or “violent”.

“There can be no such thing in law as a violent protest,” the experts said. “There are violent protesters, who should be dealt with individually and appropriately by law enforcement. One person’s decision to resort to violence does not strip other protesters of their right to freedom of peaceful assembly. This right is not a collective right; it is held by each of us individually,” the experts stressed.

“Peaceful assembly,” they added, “is a fundamental right, not a privilege, and the government has no business imposing a general requirement that people get permission before exercising that right.”

The experts also emphasized that legislators should be mindful of the important role that the right to freedom of peaceful assembly has played in the history of American democracy and the fight for civil rights.

“We call on the US authorities, at the federal and state level, to refrain from enacting legislation that would impinge on the exercise of the rights to freedom of peaceful assembly, expression and opinion,” they concluded.