Kiai to present final report to General Assembly, on assembly and association rights in the workplace 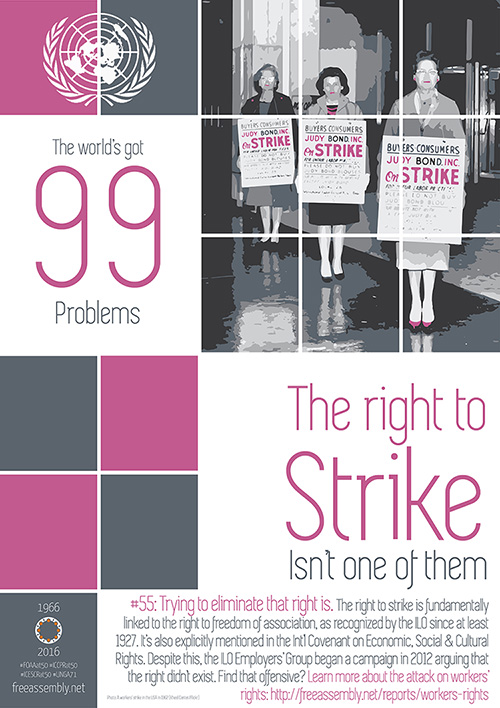 NEW YORK – United Nations Special Rapporteur Maina Kiai will appear before the 71st Session of the UN General Assembly on October 20 to present his final report to the body – a study examining the exercise of assembly and association rights in the workplace.

Kiai, who is has served as the UN Special Rapporteur on the rights to freedom of peaceful assembly and of association since 2011, is scheduled to present at the General Assembly’s 71st Session on October 20, at 12 p.m. noon local (EST) time. The session will be broadcast live on http://webtv.un.org/.

Kiai’s report – which is available here – scrutinizes the exercise and enjoyment of assembly and association rights in the context of labour, with a focus on the most marginalized workers, including global supply chain workers, informal workers, migrant workers, domestic workers and others.

Although labour rights are sometimes seen as distinct from more general human rights, the Special Rapporteur emphasizes at the outset of the report that this thinking is false. The rights to freedom of peaceful assembly and of association are in fact the foundation for the exercise of all labour rights, since are the vehicle that protects workers’ ability to meet, organize and have a collective voice.

“Labour rights are human rights, and the ability to exercise these rights in the workplace is prerequisite for workers to enjoy a broad range of other rights, whether economic, social, cultural, political or otherwise,” Kiai writes in the report.

Although States are obligated under international law to respect, protect and fulfil workers’ assembly and association rights, the report paints a grim picture of what is happening in practice. The Special Rapporteur cites dozens of examples of rights violations in more than 50 countries, ranging from union busting to legislative gaps to assassinations of union leaders.

The implications of States’ failure to protect workers’ rights are grave, Kiai notes, since weakened labour rights can exacerbate problems such as global inequality, poverty, violence, child and forced labour, and directly contribute to problems such as human trafficking and slavery.

The report concludes with extensive recommendations to States, the ILO, businesses and civil society on how to promote improved respect for workers’ assembly and association rights.

“The global attack on labour rights has made it disturbingly clear that the old ways of defending workers’ rights are no longer working,” Kiai writes. “Our world and its globalized economy are changing at a lightning pace, and it is critical that the tools we use to protect to labour rights adapt just as quickly. A first step towards this goal is to obliterate the antiquated and artificial distinction between labour rights and human rights generally.”

A factsheet summarizing the report’s key findings and recommendation is available here.

The full report (A/71/385) is available at this link in all six official UN languages: http://freeassembly.net/reports/workers-rights/

The event is sponsored by the Solidarity Center in cooperation with the AFL-CIO, Human Rights Watch, the Ford Foundation and the International Trade Union Confederation (ITUC). It will be held at the United Nations building in New York, Conference Room 9, from 9 am to 1 pm on Oct. 21.

The event is open to anyone with access to United Nations grounds.

The Special Rapporteur will also speak at New York University’s Stern School of Business at 4:30 pm on Oct. 20. Further details on the lecture – titled “The World’s Got 99 Problems and Workers’ Rights Aren’t One of Them: A Discussion with Maina Kiai” – are available at this link.