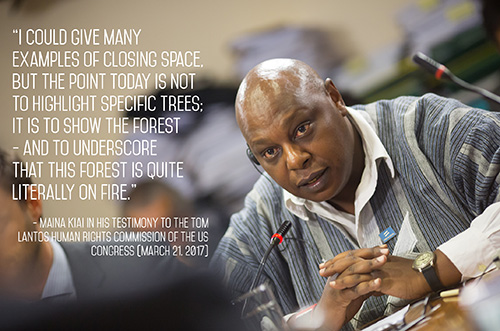 Hearing theme: “Closing civic space and the threat to the future of global democracy”

The Honorable Co-chairs of the Tom Lantos Human Rights Commission of the US Congress, Ladies and Gentlemen:

Thank you for inviting me to address this body on the subject of “closing space for civil society” – in other words, the increasingly restrictive and hostile environment that civil society faces throughout the world.

I have served as the United Nations Special Rapporteur on the rights to freedom of peaceful assembly and of association since May 2011, with a mandate to examine, monitor and publicly report on these rights across the world.

I have been reflecting a great deal on how much the world has changed since the UN Human Rights Council created my mandate in October 2010, which was sponsored by the US.

Back then, the rights to freedom of peaceful assembly and of association were sometimes overlooked in the pantheon of rights, and the phrase “closing space for civil society” was way less common.

Since then, however, these rights have underpinned some of the most momentous political events of the 21st century: The Arab Awakenings in the Middle East and North Africa; mass protests that forced out leaders in Ukraine, Guatemala, Iceland, South Korea, Burkina Faso and Brazil; citizen movements in Hong Kong, Ethiopia, Bahrain, Malaysia, the United States; and so much more.

We have seen quite dramatically the power that civil society can wield in peacefully progressing democratic values and the aspirations of ordinary people.

Unfortunately, over the same time period, we have also seen the most comprehensive rollback of civic freedoms since the end of the Cold War including:

We have also seen the rise of politicians coming to power on the back of promises to restrict fundamental rights, such as Rodrigo Duterte in the Philippines.

Sadly these new tactics of repression and control have gone hand in hand with some of the old tactics: We remember and honor Berta Caceras, the founder of the Council of Popular and Indigenous Organizations in the Honduras who was killed almost exactly a year ago.

These two trends may seem paradoxical, but they are, in fact, inextricably linked. It is precisely because civil society can be so powerful, persuasive and persistent that governments are moving to restricting it. And it is precisely because civil society has been so successful in motivating change that those with power, including powerful business interests, are fighting back.

And that fight-back has been vicious. I could spend the rest of the afternoon recounting hundreds of examples of just how difficult the environment is right now for civil society actors of all sorts, in every corner of the globe. There is the brutal suppression of demonstrators that has been taking place in Ethiopia since late 2015, with hundreds killed by the government and no officials held to account.

And in Kenya, the excuse of counter terrorism has been used to try to silence critical NGOs whose work, ironically, reduces the scope for violent extremism by exposing corrupt, extortionist security forces.

In Cambodia, government leaders are rewriting laws to suppress independent NGOs and trade unions, jailing activists for exercising their fundamental rights, and using violence and a corrupt judiciary to undermine any political opposition—mainly to shield themselves from accountability for mass corruption. Similar efforts are ongoing in Malaysia, where the regime is targeting all critical sectors to avoid accountability for the massive corruption around the 1MDB organization—some of whose proceeds have been invested here in the USA.

There is Bahrain and its thousands of political prisoners, including people like Abdulhadi Al-Khawaja and my friend Abduljalil Al-Singace (both featured in this Commission’s Defending Freedom’s Project) who will spend the rest of their lives in prison for leading peaceful pro-democracy protests.

It is the same story in Azerbaijan where the authorities have put in place legislation allowing the State to fully control civil society and justify the arbitrary detention of critical human rights defenders, journalists and activists.

And in Rwanda, economic progress is hailed even when it comes at the expense of closed space for civil society and no tolerance for public dissent.

I could give many more examples — including from the UK, France, Russia, and Kazakhstan — but the point today is not to highlight specific trees; it is to show the forest — and to underscore that this forest is quite literally on fire.

Indeed, as my term as Special Rapporteur comes to a close, one thing is increasingly clear to me:

We are in the midst of an epic global struggle, and it is not just civil society space, assembly rights, or any other human right in isolation. It is about our freedom writ large – a global clash between tyranny and intolerance on the one hand, and self-determination and dignity on the other that could shape the course of our world for generations to come.

This struggle is for the future of equality, humanity and democratic values.

It could also be a fight for our very existence, given the slew of serious and intractable problems our world faces today: brutal wars, rampant corruption, devastating environmental destruction, growing poverty amidst dangerous inequality and a shrinking middle class, violent extremism, and rising intolerance of “the other,” just to name a few.

It is in everyone’s interests to give people tools to fight these “forest fires,” — and to do it peacefully — so that we can reconfigure it into something more sustainable, equitable and just.

It is a time when assembly and association rights are needed most, so people can peacefully speak out, contribute their talents and share their ideas.

If we don’t give people these tools, our world faces a dark future.

If there is one thing I have learned in my years defending human rights, it is that people who have no means to engage in their society also have no stake in protecting it, let alone defending it. Inevitably some will feel emboldened to destroy it, because it no longer includes them. The destruction may not come tomorrow, next week or even next year; but eventually things will explode.

The struggle we face today is about creating a world where people have a stake. The road to achieving this world will not be easy.

But let me conclude by emphasizing that it will be harder to achieve without the United States fulfilling its role as a global leader on human rights.

The United States—which graciously hosted me on an official visit last summer—needs to set an example by promoting and protecting the fundamental rights of its citizens, and the people on its soil.

It starts with the United States doing more to de-racialize the criminal justice system so that Black people feel that their lives matter.

It starts with the United States embracing the power of freedom of peaceful assembly instead of allowing discourses and legal efforts to violate and undermine it.

And it starts with the United States leading the fight against misogyny, intolerance and bigotry, both for all the people in its territory, but also as an integral part of its foreign policy and international relations.

This means that the United States should continue to play an active, and hopefully positive, role in multilateral bodies such as the United Nations. It means not playing favorites when it comes to human rights abroad, and recognizing that security and human rights are indivisibly linked. There can be no peace without justice. There is no stability without freedom.

If ever there was a time for the US Congress to assert its leadership both here and abroad it is now. Many generations past have looked to the US and the US Congress as the beacon of hope and support for progressive values, and at a time when democratic values are in recession across the globe, this August body is more necessary than ever.

This is not a time for empty words, trite slogans and doublespeak. The stakes are too high – for the United States, and for all of us.