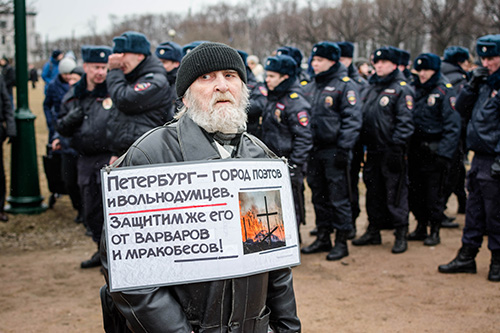 GENEVA – UN human rights experts, including Maina Kiai, are calling on the authorities in the Russian Federation to release immediately everyone arrested in peaceful demonstrations across the country on Sunday.

Reports say up to one thousand peaceful demonstrators, including many young people, who took to the streets following allegations of corruption against the Prime Minister, were arrested by police who had deemed the protests unlawful. A number of these protesters were subsequently sentenced to imprisonment and fines. A group of human rights activists were also arrested and sentenced to jail after live-streaming the protests. In addition, a couple of journalists covering the demonstrations were arrested and later released.

“We call on the authorities to release immediately all protesters still being detained, and to quash the sentences imposed on them,” stressed the experts.

“While we welcome the release of arrested journalists, their arrest should not have taken place in the first place as this represents an attack not only on the safety of the individual journalist, but also on the public’s right to information about the protests. This right is equally hindered through the sentencing of the citizen journalists who live-streamed the events,” said the experts.

“Freedom of peaceful assembly is a right, not a privilege, and as such its exercise should not be subject to prior authorization by officials. This right, jointly with the rights to freedom of opinion and expression and freedom of association, plays a decisive role in the emergence and existence of effective democratic systems, as they allow for dialogue, pluralism, tolerance and broadmindedness where minority or dissenting views or beliefs are respected,” added the experts.

They echoed Human Rights Council resolution 25/38 in which the UN human rights body stated that ‘peaceful protests should not be viewed as a threat’, and encouraged all States to ‘engage in an open, inclusive and meaningful dialogue when dealing with such protests and their causes’.

“We urge the Government of the Russian Federation to fulfil its positive obligation under international human rights law to protect and facilitate the exercise of the rights to freedom of peaceful assembly, freedom of opinion and expression, and freedom of association, and not to interfere with the exercise of these rights,” stressed the experts.

Finally, ahead of the presidential elections next year, the human rights experts gave a warning that genuine elections cannot be achieved if the rights to freedom of peaceful assembly, freedom of opinion and expression and freedom of association are curtailed.

“The coming elections will be irreparably tainted if individuals are not allowed to exercise these basic rights without fear of harassment or retaliation,” the experts concluded.

This press release is also available in Russian here.