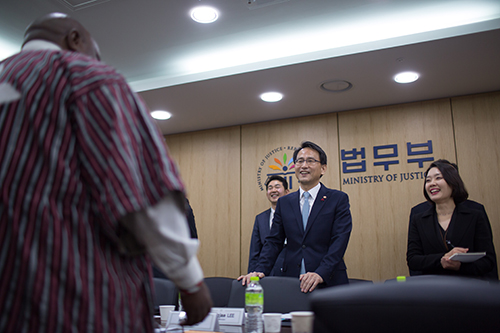 SEOUL – United Nations Special Rapporteur Maina Kiai today commended the Republic of Korea’s “impressive achievements,” but underlined that its journey to democracy is not yet over. At the end of his first official visit to the country, Mr. Kiai warned that the democracy project is still being threatened by a decline on the rights to freedom of peaceful assembly and of association.

“The project of building democracy and human rights in South Korea is not over; indeed it never truly is, in any nation,” said the independent expert mandated by the UN Human Rights Council to monitor and promote the realization of the rights to freedom of peaceful assembly and of association worldwide. “What we have is a structure, and our solemn task as governments and citizens is to continually build upon that structure, strengthening the foundation and cultivating its resilience.”

While the Special Rapporteur applauded the Government’s many human rights achievements, he also highlighted “a trend of gradual regression on the rights to freedom of peaceful assembly and of association – not a dramatic shutdown of these rights, but a slow, creeping inclination to degrade them.”

Mr. Kiai said that undue restrictions are seeping into every stage of the peaceful assembly process in South Korea, despite what he called a “rich history of protest.” These limitations range from formal legal constraints to more practical obstacles and are gradually reducing the right to peaceful assembly to a privilege, he said. Government officials frequently use national security and people’s “convenience” as rationales for restricting protests, but often go too far in doing so.

He cited as a “fundamental problem” the fact that assemblies are deemed to be “unlawful” unless organizers notify the authorities in advance, and the authorities’ practice of banning many demonstrations even after notification.

“Organizers’ failure to notify does not make an assembly illegal,” the independent expert said. “Nor should the notification process be used to preemptively ban assemblies, except in very limited circumstances. I was informed that in many cases, notifications result in authorities banning assemblies to prevent disruption of traffic or to enforce blanket bans against assemblies at certain locations or times; these justifications are not appropriate under international human rights law.”

The Special Rapporteur also highlighted aggressive police tactics during assemblies, such as the use of bus barricades, water cannons and massive deployments of personnel.

“The use of water cannons and bus barricades – particularly when coupled with massive deployment of force – is almost guaranteed to increase tension between police and protesters,” Mr. Kiai said. “This is not a justification of violence, but rather an observation of human nature: aggression only begets aggression.”

He urged authorities to emphasize a philosophy of de-escalation and communication in evaluating its approach to managing protests, calling these “the more pragmatic options – in terms of proper assembly management, in terms of protecting protesters’ human rights and for ensuring public order.”

At the same time, he also urged all South Koreans to engage in assemblies with peaceful intentions, to ensure that their message is better heard and to reduce tensions.

The expert found fewer issues surrounding the right to freedom of association for non-governmental organizations, calling the level of civil society participation “impressive.” He did, however, call attention to problems experienced by some civil society groups, including the LGBTI association Beyond the Rainbow Foundation, in attempting to obtain legal personality.

He also highlighted concerns about workers’ right to organize. “Despite general legal provisions recognizing workers’ rights overall, there remain challenges jeopardizing the realization of these rights for certain categories of workers,” he said, citing “irregular” workers, those in “disguised working relationships,” teachers and public officials as examples.

Other areas of concern included the recent outlawing of the Korean Teachers and Education Workers Union (KTU), employers’ efforts to snuff out independent unions, and undue restrictions on the right to strike.

During his nine-day mission, which included visits to Ansan, Gyeongju, and Pohang, Mr. Kiai met State officials, civil society, the diplomatic community and families who lost their children in the Sewol ferry tragedy.

Regarding the Sewol tragedy, the Special Rapporteur noted that assemblies related to the Ferry Disaster were “a natural response to the feeling that the families’ concerns are not being addressed adequately by the authorities” and called on the government to “maintain open communication channels with the Sewol families and their representatives.”

The Special Rapporteur will present a final report on his visit to the Human Rights Council during its 32nd session in June 2016.

More on the Special Rapporteur’s visit to the Republic of Korea:

Full report on the Republic of Korea country visit