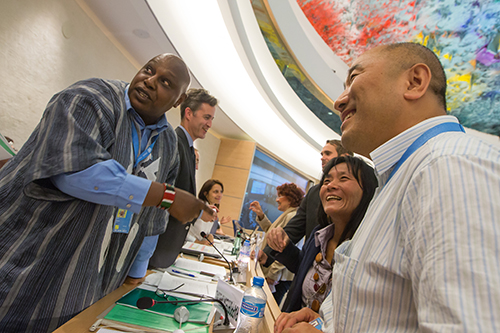 GENEVA – The United Nations Special Rapporteur on the rights to freedom of peaceful assembly and of association, Maina Kiai, called for a new treaty binding businesses to respect fundamental human rights, and for States and corporations to fully engage with civil society organizations in the context of natural resource exploitation.

“Corporations play an outsized role in the decision-making processes about exploitation of natural resources. But they are not subject to legally binding human rights obligations,” Mr. Kiai told the UN Human Rights Council during the presentation of his latest report. “It is time to address this issue more robustly; corporations must not escape responsibility to safeguard human rights.”

In response to these concerns, the Special Rapporteur called upon States to enact a legally binding human rights instrument that applies to all corporations, regardless of their size or geographical scope.

“I am aware that some would rather strengthen compliance with the Guiding Principles than have a binding treaty. But this should not be an either/or matter: Both should be pursued to protect human rights.”

The Special Rapporteur also highlighted States’ responsibility to recognize civil society organizations, including affected communities, as key actors in the context of natural resource exploitation. He noted that, in many countries, interested parties lack mechanisms to express their concerns freely, and warned that “Governments are more receptive to corporations’ positions than the needs and concerns of affected communities.”

In his report, the Special Rapporteur argues that States’ and corporations pervasive disregard of communities and associations’ input in the natural resources sector is counterproductive and divisive, and is likely contributing to an erosion of confidence in the world’s prevailing economic system.

“The rights to freedom of peaceful assembly and of association are instrumental in achieving sustainable and mutually beneficial exploitation of natural resources,” he said. “These rights help foster increased transparency and accountability in the exploitation of resources and inclusive engagement throughout the decision-making chain.”

During his presentation, Mr. Kiai also warned that authorities have increasingly sought to stifle expressions of criticism and opposition by cracking down, often with unnecessary force, on peaceful protests; arresting, prosecuting and imprisoning activists; raiding protest camps; harassing and intimidating human rights defenders; enacting restrictive legislation on associations; and interfering with the operations of civil society organizations.

“Peaceful protests are banned from sites where natural resource exploitation takes place and the situation is not any better in relation to the right to freedom of association,” he noted. “Individuals and associations who express opposition to natural resource exploitation processes are vilified as ‘anti-development’, ‘unpatriotic’, and even as ‘enemies of the State’”.

“This intolerance is reflected in countries in the global North, and the global South,” the Special Rapporteur said. “Nevertheless, I remain optimistic because of the incredible courage and determination of activists and ordinary people who refuse to be cowed or defeated, even if it means paying with their lives.”

A full transcript of Maina Kiai’s statement to the Human Rights Council is available at this link (English only).

The full version of this press release is available via OHCHR in English and Chinese.

Photos of the Special Rapporteur at the Human Rights Council