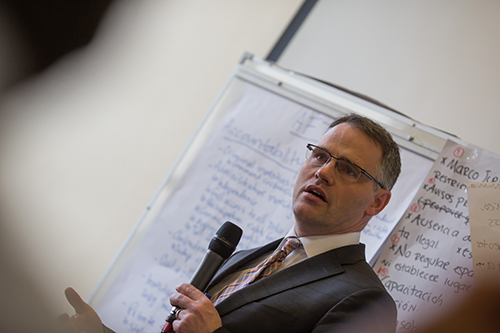 SANTIAGO, Chile – Over 20 experts from throughout the Americas joined Special Rapporteur Maina Kiai in Santiago, Chile, last week for the first consultation in a project to develop practical recommendations for the proper management of assemblies.

The recommendations were mandated by the UN Human Rights Council in resolution 25/38, and are due to be presented in March 2016, at the Council’s 31st session. They will be drafted jointly by Kiai, who is the Special Rapporteur on the rights to freedom of peaceful assembly and of association, and Christof Heyns, who is the Special Rapporteur on extrajudicial, summary or arbitrary executions. Heyns was represented at the consultation by his research team.

“Peaceful assemblies play a central role in any democracy – allowing people to express their grievances and giving governments a chance to take the pulse of public opinion,” Kiai said. “The goal of these recommendations is to give States a roadmap on how to manage peaceful assemblies in an effective way that also fully respects participants’ fundamental rights.”

Participants at the consultation, who came from over a dozen countries throughout the Americas, emphasized that the recommendations should not be limited to managing protests themselves, but should also look at what happens before and after protests.

Several experts noted that the proper training of security forces, domestication of international law norms and preventative measures to avoid conflicts, for example, are extremely important for avoiding problems during peaceful assemblies. Similarly, eliminating reprisals against protest organizers and ensuring there is no impunity for human rights violators after protests is key to making sure that people actually feel safe exercising the right to freedom of peaceful assembly.

Participants also suggested real-time remote monitoring of protests by human rights groups, better access to information and government, and more rigorous vetting of so-called “less lethal” weapons – which, despite their name, often do cause serious injuries and even death.

“The input of participants at these consultations is indispensable,” Kiai said after the meeting. “These are people who live and breath assembly rights on a day-to-day basis. Their expertise is critical in ensuring the recommendations’ relevance and utility.”

The process of gathering input for the recommendations will continue throughout 2015, with the next consultation scheduled for Aug. 7, 2015, in Pretoria, South Africa.

The Special Rapporteurs are also soliciting input from experts and the general public via a questionnaire, which is available in English, French and Spanish. Responses will be accepted through May 31, 2015. For more on the project, please see our hub page.

Photos from the Santiago consultation are available via the Special Rapporteur’s Flickr page.