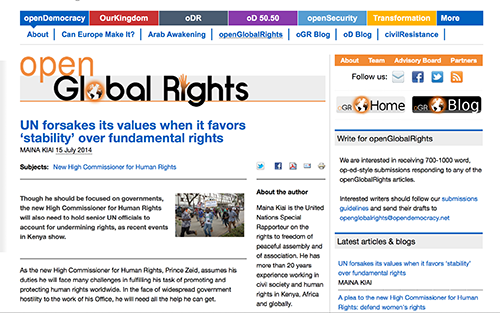 Maina Kiai has called on the incoming UN High Commissioner for Human Rights, Prince Zeid, to “hold governments accountable for the human rights pledges that they make” and ensure that human rights is a “real rather than rhetorical” pillar of the UN system.

The call came in a commentary by Kiai that was published today in openGlobalRights, a multilingual online publication that covers human rights issues worldwide. The publication is currently running a series of pieces in which global leaders give their advice for the incoming High Commissioner, who takes up his post in September.

The catalyst for Kiai’s piece was a recent joint statement by the UN System in Kenya (UN-Kenya) and the Kenya Private Sector Alliance in which they expressed concern about an important political rally planned by the opposition party in Kenya.

The rally took place on July 7 and concluded peacefully. But according to the statement, UN-Kenya and its business partners were “convinced” in advance that the rally would “… create more tensions [and] anxiety among investors and Kenyans in general.” The only solution to Kenya’s problems, they said, is “… a peaceful, secure environment in which investors are confident that their investments are secure.

“Why should UN-Kenya reflexively align itself with business rather than civil society or people demanding their rights?” Kiai asks in the piece.

Human rights are supposedly one of the “three pillars” of the UN system, Kiai notes, but they receive only 3% of the UN budget. The new High Commissioner’s task will be to ensure that human rights receive more than 3% of the UN’s attention.

The role of multilateral organizations – including the UN – in promoting assembly and association rights will be the topic of Kiai’s next report as Special Rapporteur. The report will be presented to the UN General Assembly in October 2014.

The piece is available here, or by clicking the image at right.