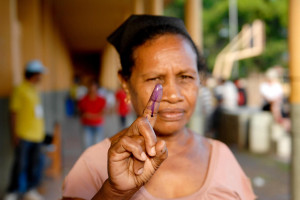 United Nations Special Rapporteur Maina Kiai will appear before the UN General Assembly on Oct. 29 to present a key report on worldwide threats to freedom of assembly and associations during election periods.

Kiai’s presentation will begin at 3 p.m. (US Eastern Standard Time), and will be broadcast live on the UN website, webtv.un.org.

The report documents a growing crackdown on assembly and association rights during election periods, and contends that such measures threaten to “indelibly stain” the legitimacy of democracy in some countries. It concludes that genuine elections cannot be achieved if the rights to freedom of peaceful assembly and of association are curtailed.

The report calls upon UN member states to improve efforts to facilitate and protect assembly and association rights during election periods, and to be particularly vigilant in relation to the needs of groups which are at greater risk for attacks.

“Too often the international community judges the legitimacy of elections solely upon on what happens during the vote,” Kiai said. “That’s not good enough. Elections don’t take place in a vacuum. It is equally important to examine what happens before and after elections, and judge elections after surveying the rights landscape as a whole.”

Following the presentation of the report, Kiai will also participate in two side events in New York on Oct. 30 and Oct. 31.

The first event – “2010-2013: reflecting on the first three years of the mandate of the Special Rapporteur on the rights to freedom of peaceful assembly and of association” – will take place at 1:15 p.m. on Oct. 30 at Room CR 6 NLB of the UN building.

The second event – “Protecting Rights During Elections: A Unique Opportunity to Debate a Country’s Future” – will take place on Oct. 31 at 1 p.m. It will be held at the Millennium Hotel ONE UN near UN headquarters. It is open to delegates from UN permanent missions.

A press release with more information on both events is available here for English and this link for Chinese.