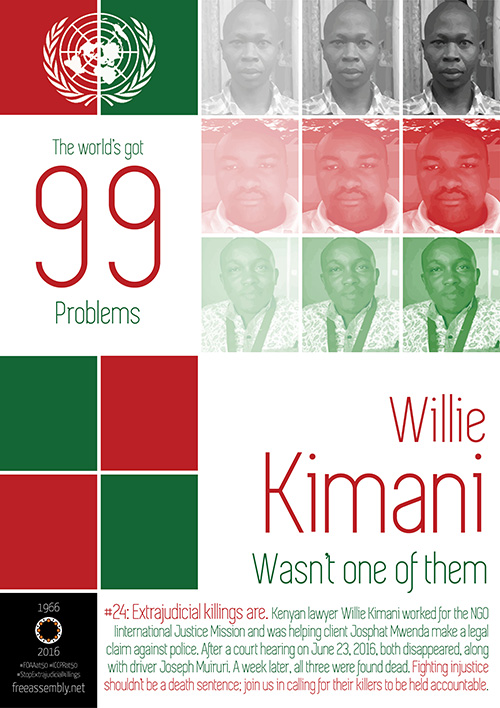 GENEVA – A group of United Nations human rights experts, including Maina Kiai, today expressed deep concern about the on-going pattern of extrajudicial executions in Kenya. They urged the Government to put an end to police violence and ensure accountability for the perpetrators.

The experts’ call comes as four police officers are charged with the murder of human rights lawyer Willie Kimani, his client Josephat Mwenda, and their driver, Joseph Muiruri, in the latest high-profile case in a long list of enforced disappearances and extrajudicial killings in Kenya.

“The recent murder of a well-known lawyer and human rights defender is having a dramatic and detrimental impact on civil society, especially on those active in the field of human rights,” the experts noted. “It is urgent for the Government of Kenya to address the apparent structural and systemic motives behind police brutality.”

The Kenya National Commission on Human Rights documented a pattern of widespread and systematic human rights violations which include extrajudicial killings and enforced disappearances, as well as arbitrary arrests, extortion, arbitrary detention and torture, in a 2015 preliminary report about alleged human rights violations by police and other security agencies in relation to counter-terrorism measures.

“The murder of Mr. Kimani, who was renowned for his work with the International Justice Mission, which fights police abuse of power, among many other rights violations, is a dramatic loss for the human rights community in Kenya. This heinous human rights violation should prompt the authorities to take concrete measures to put an end to police impunity,” the experts underscored, stressing that this should include, but not be limited to, providing adequate support and capacity to the Independent Police Oversight Authority.

Mr. Kimani had been representing Mr. Mwenda, who filed a complaint with Kenya’s Independent Policing Oversight Authority when a police officer shot at him at a traffic stop following an incident in April 2015. Mr. Mwenda was later accused of various offenses, which his lawyers believe have been fabricated charges to silence him. On 1 July 2016, Mr. Kimani, Mr. Mwenda and Mr. Muiruri were found in a river in Ol-Donyo Sabuk, Machakos county, with apparent signs of torture, one week after they had been abducted by unidentified persons.

“The fact that Mr. Kimani had been working on a police brutality case around the days he was killed is deeply troubling,” they said. “We are gravely concerned that the disappearance, torture and executions of the three men are directly related to Mr. Kimani’s legitimate work, as a lawyer and human rights defender, in the defence of Mr. Mwenda’s rights as a victim of excessive use of force by the police”.

“It is vital for human rights defenders to exercise their human rights and fundamental freedoms free from intimidation or fear of reprisals; and for the society as a whole to live in a country respectful of the rule of law,” the UN independent experts concluded.