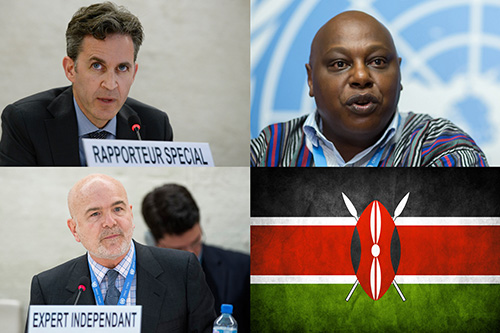 GENEVA – Three United Nations human rights experts have called on the Government of Kenya to cease its systematic crackdown on civil society groups, which has intensified in the lead-up to national elections scheduled in August.

“We are extremely alarmed at the increasing number of attacks on civil society as the elections draw closer,” said the UN Special Rapporteurs on freedoms of peaceful assembly and of association, Maina Kiai; on freedom of opinion and expression, David Kaye; and on the situation of human rights defenders, Michel Forst.

“It appears that there is a systematic and deliberate pattern to crack down on civil society groups which challenge governmental policies, educate voters, investigate human rights abuses and uncover corruption. These issues are extremely important in a democracy, and attempting to shut down the debate taking place in the civic space threatens to irreparably taint the legitimacy of the upcoming elections,” they added.*

The experts’ call comes just a month after the Interior Ministry called for the closure of non-governmental organizations (NGOs) deemed to be ‘not properly licensed’. A Government circular alleged the groups had been involved in ‘nefarious activities’ and claimed they posed a serious threat to national security including money laundering, diversion of donor aid and terrorism financing.

The Kenya Human Rights Commission (KHRC) – the leading human rights NGO in the country – was also threatened with investigation, amid allegations of mismanagement and other offences. Officials have also called for the KHRC’s financial assets to be frozen.

“The authorities should not have discretion to arbitrarily shut down associations, to decide which ones can register, or to interfere in their day to day operations,” the experts said. “The right to freedom of association is a fundamental right, and like all fundamental rights, its exercise cannot be predicated upon government permission.”

Several high-level officials have publicly condemned foreign interference with the electoral process, especially through NGOs working in the field of civic education.

The experts also highlighted as an obstacle the Government’s failure to implement the country’s Public Benefit Organization (PBO) Act, which was signed on 14 January 2013, and has not been gazetted. The legislation aims to provide a better enabling environment for NGOs.

“It is astonishing that four years after its passage, the PBO Act has yet to be operationalized, despite a court order directing the Government to do so,” the experts said.

The experts urged the Government to gazette the law immediately, and more generally, to improve the environment for civil society ahead of the elections.

“The right to freedom of association is critical in pre-electoral contexts, where voters bear the solemn duty of electing their representatives,” the experts said. “Voters cannot properly perform this duty when they are deprived of an environment that facilitates the exchange of ideas – including dissenting ideas.”

“Elections are a time when governments should give people more space – not less – to organize, voice their concerns and express their collective will,” the experts concluded. “We call on the Government of Kenya to expand this space, not to contract it.”

(*) Read the report of Special Rapporteur Kiai on the exercise of the rights to freedom of peaceful assembly and of association in the context of elections: http://freeassembly.net/reports/elections/

This press release is available in English via OHCHR.