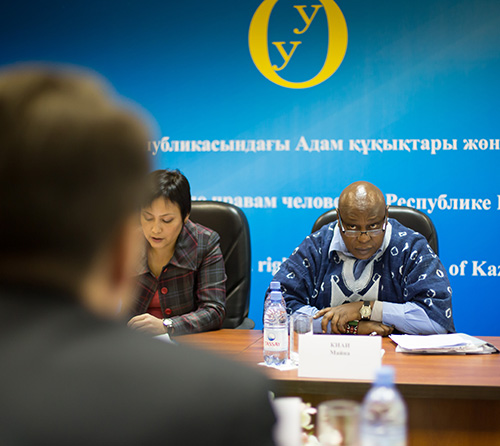 The two rights defenders were sentenced in November to five years in prison for ‘inciting social discord’, ‘disseminating information known to be false’, and ‘violating the procedure for holding assemblies’.

They were also banned from engaging in public activities for three years after serving their sentences for their roles in organizing protests in April and May 2016 to oppose the proposed amendments to Kazakhstan’s land code.

“Not only the legal process against Mr. Bokayev and Mr. Ayan raised serious questions about its fairness, but also the charges brought against them essentially criminalized their rights to peaceful assembly and free expression of dissenting views,” the experts said.

“The rights defenders, Max and Talgat, should have never faced prosecution for exercising their rights,” they said.

“Such prosecution, reportedly tainted with procedural and due process violations, runs counter to Kazakhstan’s international commitments on human rights, including the International Covenant on Civil and Political Rights.”

The experts further called the Kazakh authorities review the legal proceedings and ensure full compliance with the international and regional guarantees of the fundamental freedoms of peaceful assembly and expression.

Belarus: UN expert decries return of mass violence against peaceful protestors, demands release of all detained
March 28, 2017
View the quotes in your language: