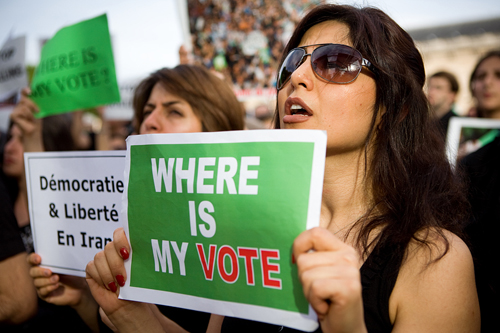 A group of United Nations independent human rights experts today warned that unreasonable limitations placed on the right of Iranian citizens to stand for Presidential office, discrimination against women candidates for elections and ongoing restrictions on freedoms of expression, association and peaceful assembly, constitute a serious violations of rights guaranteed by international law.

On 21 May, the Guardian Council, a 12-member body of theologians and jurists, which vets presidential candidates, approved only 8 individuals out of the 686 people registered as candidates for the June 14 presidential elections. Several key political figures and all the 30 female candidates were disqualified, raising serious concerns about the fairness and transparency of the vetting procedures.

Several candidates were apparently excluded on the basis of their affiliation with the 2009 post-election protests and their exercise of fundamental human rights, including the rights to freedom of expression, assembly and association.

“This mass disqualification including that of women wishing to stand in the presidential elections is discriminatory and violates fundamental right to political participation, and run contrary to the International Covenant on Civil and Political Rights, which Iran has ratified,” said the Special Rapporteur on the situation of human rights in Iran, Ahmed Shaheed.

“Any restrictions on this right must be based on objective and reasonable criteria without distinction of any kind, including race, gender, religion, and political or other opinion,” he noted, recalling that well ahead of the approval of the final list of candidates, a member of the Guardian Council said that Iranian law does not approve of a woman in the presidency.

“The International Covenant does not impose any particular electoral system, but it must be compatible with the rights protected by Article 25 and must guarantee and give effect to the free expression of the will of the electors,” Mr. Shaheed underscored.

Human rights expert Kamala Chandrakirana, who currently heads the UN Working Group on Discrimination against Women, added that excluding women from eligibility for this top political decision making position is the height of discrimination and is contrary to articles 2 and 3 of the Covenant which requires the rights to be recognised without distinction of any kind, including sex, and to ensure that they are enjoyed equally by women. “This will exacerbate their already existing severe underrepresentation in public, political and professional life,” she warned.

“The non-approval of any of the female candidates in Iran is a violation of international norms and standards,” the UN Special Rapporteur on violence against women, Rashida Manjoo, reiterated.

“Ensuring women’s participation in public affairs, including in the political sphere, through for example, temporary special measures, is an indicator that the State is applying due diligence to ensure the equality and non-discrimination rights of women,” she said. “Ensuring access to the public sphere and also measures to eradicate all forms of violence against women is an imperative that cannot be abrogated.”

The UN Special Rapporteur on freedom of expression, Frank La Rue, urged the Government of Iran to release all the detained journalists and to open space for them to effectively and independently write without fear of persecution, arrest and intimidation. “Threats to journalists and the constriction of freedom of expression in different media during electoral times seriously undermine the inclusiveness and fairness of the electoral process,” he said.

At least 40 journalists reportedly remain in prison across the country and limitations have been imposed on the freedom of expression and opinion, which could stifle critical news coverage of the elections. There are also reports that the internet has been virtually shut-down, sending of text messages has sporadically been blocked and reformist or opposition websites being censored.

“The credibility of the presidential elections will not be determined solely on the day of the vote, but on the basis of the entire process leading up to and following Election Day,” Mr. La Rue stressed. “The Government should ensure the release of all journalists currently detained in prison and should allow media activists to report freely.”

The UN Special Rapporteur on freedoms of peaceful assembly and association, Maina Kiai, called again on the Iranian authorities to release immediately the main two opposition leaders, Mehdi Karoubi and Mir Hossein Mousavi, who have been under house arrest since February 2011, along with hundreds of other prisoners of conscience who remain in prison for peacefully exercising their rights to freedoms of opinion, expression, association and peaceful assembly.

“Freedoms of expression, peaceful assembly and association are essential rights for the effective exercise of political participation and must be fully protected,” the experts concluded.